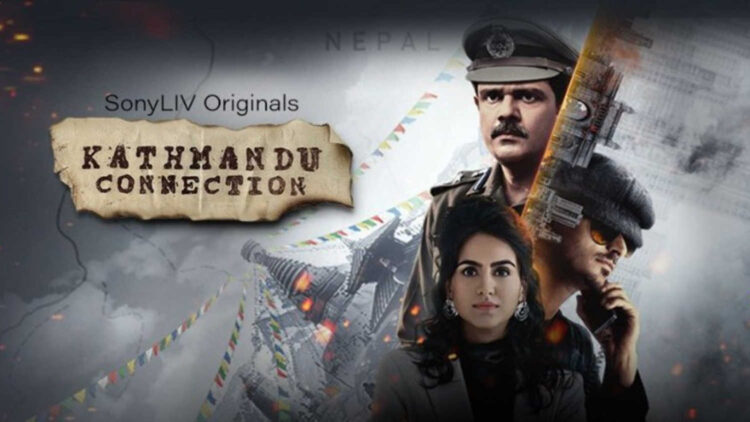 The obsession with 90s continue further. Its Mumbhai sometime back,  Mai Hero Boll Raha Hu in recent times and now it’s Kathmandu Connection streaming now on SonyLIV which had one thing in common – cop-gangster formula of 1990s.

A trouble-shooting no holds barred cop Samarth Kaushik (Amit Sial), a forthright topnotch news reporter Shivani Bhatnagar (Aksha Pardasany) who gets stalked by a mysterious caller and Sunny (Anshumaan Pushkar), a casino owner in Kathmandu who aspires to be a gang lord  are the three dots in the story of Kathmandu Connection.

These three dots get connected once Samarth lands up in Kathmandu and discovers some eerie skeletons from the cupboards of Sunny who now becomes the target of both Samarth and Shivani due to various reasons.

In the course of time, Samarth falls in love with Shivani amidst several twists and turns. What’s there in store for these three with Kathmandu as the background is the remaining part of the story.

Amit Sial gives out more than 100% in every character he plays. Be it a manipulative cricketer in Inside Edge or a fearful associate of a gunman in Season 2 of Hostages, Amit Sial is always a delight to watch. Here too he shows his authority in portraying a complex character of Samarth who is more than a high ranking police officer that meets the eye.

Aksha Pardasany and Anshumaan Pushkar are equally brilliant in their characters while Anuraag Arora as Mishra, the colleague of Samarth and Gopal Dutt as upright CBI Officer Ritesh are quite impressive.

Writer Siddharth Mishra has done his homework well in weaving a gripping story taking the gangster-cop saga as the backdrop. The superlative narrative by director Sachin Pathak holds the key in making Kathmandu Connection a riveting thriller. Though there are some elements which lessened the pace in initial episodes, overall its a credible effort by Sachin.

The background score by Sneha Khanwalkar sync well with the mood of the series and the composition ‘Syaah’ stands apart.

The cinematography by Arun Kumar Pandey is a visual treat while the editing of Nikhil Parihar commensurate with the pace of the narrative while the production designing is an asset to the whole series.

It gives a fresh feel though it dates back to the age old cop-gangster formula of 90s as the treatment embedded with some unexpected twists and turns make this 6-episode nitty-gritty thriller highly watchable. Recommended without any reservations!