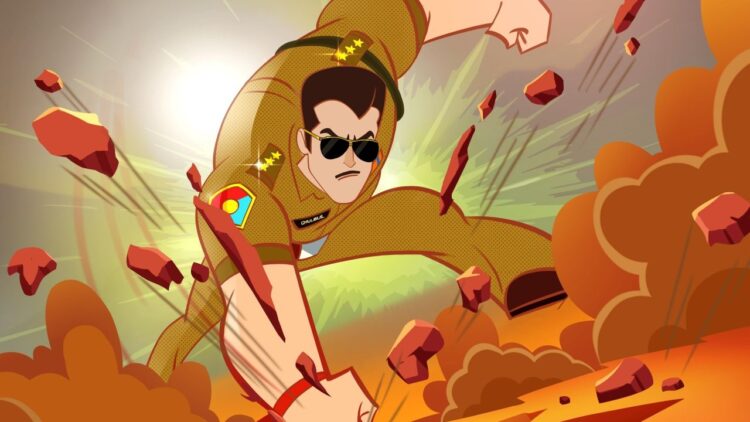 The kids now got a new friend and companion to cheer up in the form of Chulbul Pandey along with Doreman, Chacha Chaudhary, Mickey Mouse, and Toy Story on their favourite Disney+Hotstar OTT channel. Titled Dabangg, the animated series featuring Salman Khan as super cop Chulbul Pandey, Arbaaz Khan as  Makkhi and Sonakshi Sinha as Rajjo is now streaming on Disney+Hotstar VIP.

The feature film, Dabangg directed by Abhinav Kashyap and released in 2010 has become the biggest hit in the history of Indian cinema. It was dubbed and remade into various other languages including Telugu as Gabbar Singh with Pawan Kalyan in the lead role which also went onto become blockbuster hit in Tollywood. The character played by Chilbul Pandey which was on the lines of a Robinhood cop who was fearless and had his own style of getting things done has become an iconic one in the acting career of Salman Khan.

Now Salman Khan and Arbaaz are extremely happy to make reappearance in the most lovable characters in a new format and both of them shared their excitement. Salman especially wanted to watch the animated series with his nieces and nephews which is an altogether new experience and said in a statement, “I couldn’t be happier that Chulbul, Makkhi and Rajjo are returning in animated avatars to entertain the children of our country. I cannot wait to binge-watch all episodes of ‘Dabangg-The Animated Series’ with my nieces and nephews while at home”.

Created by the popular animation studio Cosmos-Maya and co-produced by Arbaaz Productions, the season one comprising of first eight episodes of Dabangg animation series is now streaming in HIndi, Tamil, and Telugu languages.