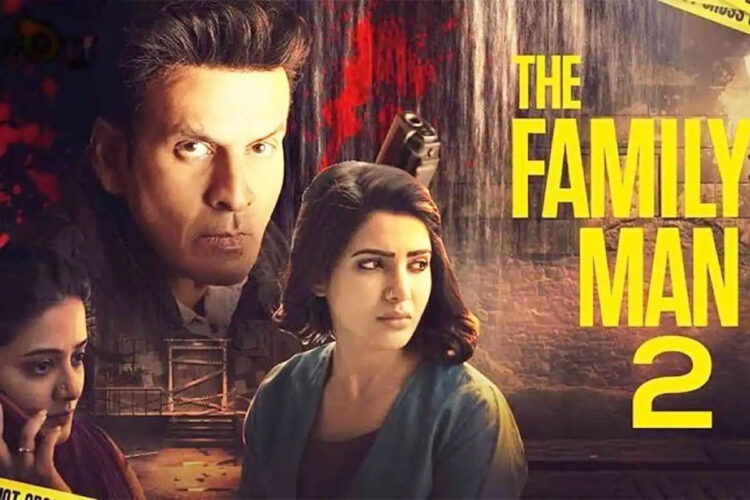 The Family Man web series has become a favourite through the length and breadth of the country. Though it was based on the common theme of terrorism, the treatment given to the story or the characters in The Family Man were quite different which is the main reason behind the success of this widely acclaimed series.

The second season which was announced in 2019 has took two long years to get into the final shape raising lot of skepticism among the followers of this series. Finally, the season 2 of The Family Man is streaming now on Amazon Prime Video allaying all fears and rumours.

Srikant Tiwari (Manoj Bajpayee) lands up in a monotonous 9 to 5 job after quitting TASC and J K Talpade (Sharib Hashmi) embarks on a new mission in Chennai. Suchitra (Priyamani) has turned into a home maker and the grown up kids, Atharv (Vedant Sinha) and Dhriti (Ashlesha Thakur) continue with their tantrums as usual targeting Srikant.

The nagging boss at the work place and turbulence in the marriage life makes Srikant restless and lost. To top it, Suchi hires a counsellor to make their marriage work which leaves Srikant furious.

Following a rift on the birthday of Suchi, the couple have decided to pursue their previous lines of career. Suchi joins the company where she earlier worked with Arvind (Sharad Kelkar) and Srikant back to TASC.

Now Srikant’s mission in TASC is to stop Raji (Samantha Akkineni) the avenging Tamil rebel from carrying out a suicide attack on the Prime Minister of India and President of Sri Lanka during their meet in Chennai.

This is the only tip of the story than can be revealed as there are more twists and turns as a matter of fact which needs to be watched on the screen only.

What an actor this Manoj Bajpayee is? He enlivens every scene, be it an emotional, action, sentimental, furious, or a lighter one, he fits like a glove into every mould and mood. During his outbursts and display of varied emotions or the joy while sharing the camaraderie with his colleague, his performance was outstanding.

And Samantha, all the South Indian audience knew by this time about her capabilities as an actor that need no introduction. But for all others who have not seen her films, her performance will be like a thunderbolt. She has played the character of Raji with utmost perfection starting right from her body language, her walking style and to that glint of avenge in her eyes, she was mind-blowing and incomparable.

The most heartening feature of this series is the importance of every single character that appear all through the series. None can be ignored including the character of the young Atharv and Dhriti played admirably by Vedant and Aslesha Thakur which are equally outstanding. No single actor in the series looks wasted or unrelated to the story. This is the positive aspect of the series which played a significant role in establishing the right identity of the characters to propel the narrative in right direction.

All the other actors, Sharib Hashmi, Sunny Hinduja, Priyamani, Shahab Ali, Alagaperumal, Sharad Kelkar (though in a shorter role), Seema Biswas, Ravindra Vijay, Darshan Kumar, Anandsami, Srikrishna Dayal, Mime Gopi, Dalip Tahil, Vipinkumar Sharma along with everyone however small the character like Uday Mahesh as Chellam was, have performed very effectively and all of them deserve a round of applause for their superlative performances.

Special mention about Abhay Verma as Kalyan aka Salman who has displayed perfect emotions and the other is Devadarshini Chetan as Umayal who was impressive as a righteous cop who joins the mission and aptly fulfills the void created by the absence of Zoya (Shreya Dhanwantary).

When one has got an ensemble star cast, the narrative gets undermined usually but in the case of The Family Man 2, the narrative elevates the performances to the maximum. The screenplay of Raj & DK along with Suman Kumar and Suparn S Varma was flawless and this is the predominant factor behind the success of the series.

Though there were too many switch overs of locations, the narrative never lost its grip on the story and there was not a single dull moment where it got dragged or distracted a bit. Each and every scene was full of liveliness and this was the beauty of the series. Full credit obviously to Raj & DK who are the visionaries behind the series.

The direction of Suparn S Varma and Raj & DK was top notch and some of the scenes were well conceived particularly the initial episodes of Srikant’s frustration in the IT company and the smooth transition towards more action and thrills in the latter half was handled very well.

The background score was one of the best in recent times for a series and Ketan Sodha deserves all the accolades for his amazing effort that catapulted the narrative to the top level.

The photography by Cameron Eric Bryson was another fascinating feature of the series and the climax scenes were spectacular. Every scene was rich and lively that added resonance to the whole narrative.

One of the very few series in recent times which can be binge watched. A perfect blend of pulsating narrative and towering performances mark the season 2 of The Family Man. Watch it for Samantha, Manoj and also to have a feel of the real art of storytelling in its finest form.