‘Maestro’ Review: A true remake but without soul in parts 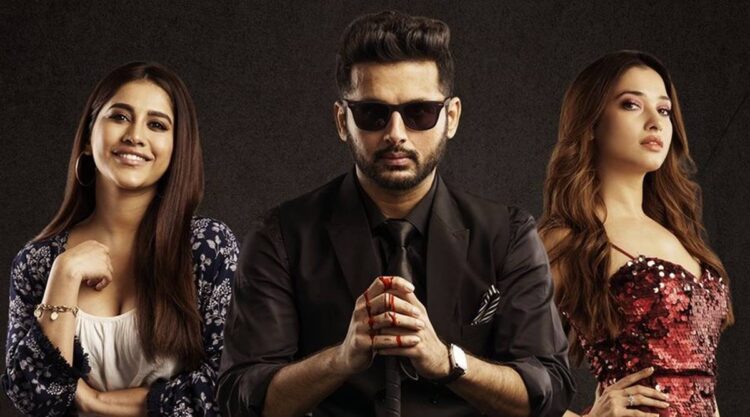 Andhadhun was one of the biggest career hits for Ayushmann Khurrana which has done wonders in Bollywood. Slick storytelling laced with suspense, drama, and thrill is the main factor that ensured its unprecedented success. This was remade into Telugu by Shresht Movies as Maestro with Nithiin as the hero and it has opted for an OTT release that was streaming now on the popular digital channel Diseney+Hotstar.

A piano player Arun (Nithiin) who pretends to be blind witnesses a murder committed by Simran (Tamannaah) and her boyfriend Bobby (Jisshu Sengupta). This turns the life of Arun upside-down driving the wedge between him and his girlfriend Sophie (Nabha Natesh).

Arun has to face the wrath of both Simran and Bobby who were on the verge of eliminating all the evidence against their crime. How Arun escapes from them and what happens to Simran and Bobby, in the end, is the remaining story of Maestro.

Nithiin is a fine actor who can make any character look very natural and true to life. He made the character of Arun look so simple though it’s quite difficult to play such a character of a man who pretends to be blind in the first part and as an actual blind man in the latter part. It’s not that easy as it looks as he has to maintain flawless expressions and body language all through the film which Nithiin has succeeded in doing gracefully.

While Tamannaah too has excelled in a character with negative shades, the Telugu dubbing by her own voice robs the charm from the character giving the feeling that we are watching a foreign language film. It’s nothing to belittle her effort to dub in her own voice, but it should have been a shade better.

Nabha Natesh also lacks that zing displayed by Radhika Apte in the original as she looked quite ordinary and her performance too lacked the depth.

Jisshu Sengupta reprised his role from the original and he has done a great job while Naresh is in his own elements as Actor Mohan, the husband of Simran.

The backdrop should have been different instead of Goa. A remake doesn’t mean that it should reverently follow the original in all aspects. It should be fine-tuned accordingly by including several regional flavours so that it gets more mileage and identity.

Why Arun should play piano only? Why can’t it be a guitar or any other musical instrument in Maestro? Because in original the hero played piano so here it has to be repeated in letter and spirit. Can’t we create something out of the box by keeping the original story and theme intact? All these questions will haunt us when watching Maestro as many of us must have watched Andhadhun.

As far as the remake was concerned, the director Merlapaka Gandhi has done a great job by making Maestro, a good carbon copy of Andhaadhun.

The classic touch shown in the songs by the composer Mahati Swara Sagar was missing in the background score which should have been a wee bit better. The background score lets you down as the narrative progress and nosedives during the latter half.

Andhadhun dominates Maestro in every aspect except for the indomitable performance of Nithiin which was the redeeming factor in this remake.

All the scenes and performances in the original linger in your mind for quite some time after watching it. But in the case of Maestro, one tends to forget everything after finished watching as it’s only a true remake but lacks the soul in parts.

‘Nakaab’ Review: An absorbing cop thriller about Power and Powerlessness

‘Unheard’ Review: A dampener that was highly disappointing

'Unheard' Review: A dampener that was highly disappointing

'Priyuraalu' Review: A breezy story of love and extra-marital relationships

'Annabelle Sethupathi' Review: Ghosts, kings, and a potpourri of comedy