‘Priyuraalu’ Review: A breezy story of love and extra-marital relationships 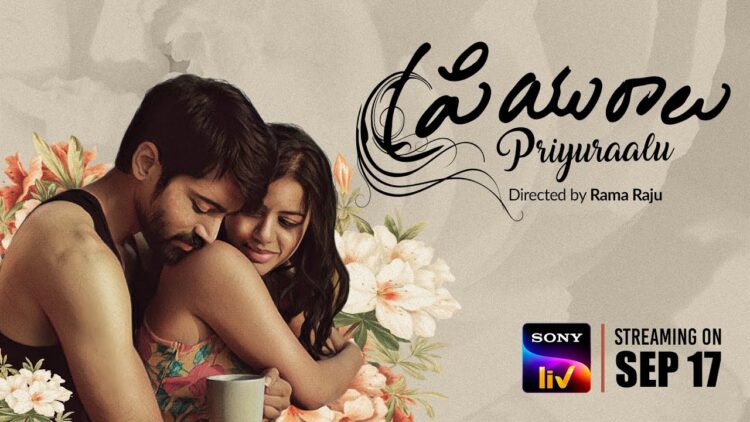 Love is the most strange thing that can happen to anyone at any time without any reason. It can create wonders in life and at the same time it can throw the life down to the abyss. That is the power of love and Priyuraalu is one such love story that is streaming now on SonyLiv platform showcasing love and extramarital relationships.

Divya (Mounika) lands up in Hyderabad to prepare for GRE and falls in love with Madhav (Prithvi) at the first sight. Divya who had a wish list where she needs to fulfill all her desires while in love gets into an intimate relationship with Madhav without knowing his background or consequences out of her love.

The love between Madhav and Divya reaches the focal point even after Divya comes to know more about Madhav as her love prevails over everything. Divya who had a bitter past that made her distant from her parents want to experience the bliss of love irrespective of consequences or the fear of losing out.

On the other side, Satyam (Koushik Reddy), the watchman traps Saritha (Kamakshi) as lust dominates the love resulting in a tragic end to his story.

What is the connection between these two stories and how Divya and Madhav can manage their love and relationship amid several challenges is the remaining story of Priyuraalu.

Mounika outshines all others in the character of Divya who had concrete ideas about love and life. She may not be a role model but there is certain depth and meaning in her character which is relatable to many girls out there.

Mounika had that spark in her provided she needs to harness her acting skills and expressions to attain more  perfection.

Prithvi Teja too has done a fab job in a subtle character who gets consumed by the love of Divya. He also should fine-tune his dialogue delivery and body language as he looks out of focus in some scenes.

Krishnam Raju as TRP mongering TV channel Content Head, Jogi Naidu as the Driver along with Koushik Reddy, Kamakshi and Sravya as Suma, the wife of Satyam were impressive in their characters.

The little girl Jaanu (Jahnavi Somisetti) needs a special mention as she steals the hearts with her cute looks though she appeared for a very limited time.

The story of Sri Soumya Akundi was on-target highlighting the positive and negative aspects of extra-marital relationships.

But the screenplay and direction by Rama Raju drifted off the target by adding more non-essential elements extending the run time to 114 minutes which should have been trimmed down considerably.

The intimate and love-making scenes though shot with some aesthetic sense may act as a spoiler that keeps some section of the audience away from this film which could turn out to be a major drawback.

Apart from these, Rama Raju has handled a sensitive subject with a lot of heart-touching elements. The thin line separating love and lust was also presented quite effectively without making it more melodramatic. Rama Raju deserves appreciation for all his efforts.

The background score by Sunil Kashyap has added great value to the narrative. The signature song ‘Priyuraalu’ written by Ramajogaiah Sastry and rendered mellifluously by Rohith stands out among all other songs followed by ‘Aaratale’ by Hemachandra and Chaitra, and ‘Moham’ by Hema Chandra.

The photography by Mahi Reddy was neat and clean without any jerks or extra frills.

A sensitive subject handled very well on the whole making Priyuraalu a breezy story of love and extra-marital relationships.

“There are loving people and there are unloving people. Unloving people pretend to be loving through the relationship. Loving people need not have any relationship – Love is enough”, these words of Osho Rajneesh sums up the gist of Priyuraalu which can be watched by all who believe in that kind of true love.

‘Unheard’ Review: A dampener that was highly disappointing

'Annabelle Sethupathi' Review: Ghosts, kings, and a potpourri of comedy

'Ankahi Kahaniya' Overview: This anthology on love was a pleasant watch