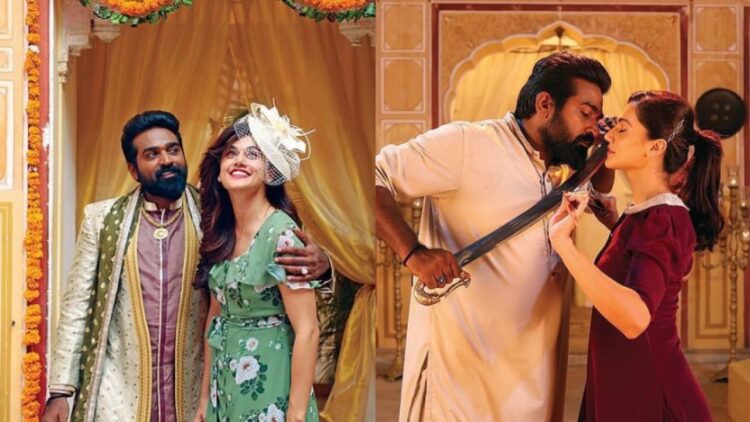 A film with a fair dose of comedy and entertainment value will sure become super successful as the audience would love such stories. Annabelle Sethupathi is one similar movie that dwells purely on entertainment that is streaming now on Disney+Hotstar, the popular digital channel.

Rudra (Tapsee Pannu) and her family comprising of mother Aryamala (Raadhika), father Rajendra Prasad, and her brother who were small-time thieves land up in Raj Mahal which was haunted by ghosts.

The ghosts staying in the palace were waiting for someone to free them from their ghost hood and Rudra comes as a savior who now has the only plan of stealing all the valuables present in the palace and escape with her family members rather than rescuing the ghosts.

On the flip side, in the flashback, Veera Sethupathi (Vijay Sethupathi) the Raja, and Annabelle (Tapsee Pannu) become victims of the conspiracy hatched by Kadhiresan (Jagapathi Babu) who wants to usurp the palace which was known for its grandeur and beauty.

How Rudra and her family escape from the palace and what happens to the ghosts inside the palace are to be seen on the screen.

Yogi Babu as Shanmugam has provided many lighter moments in particular. Rajendra Prasad on the other hand also has managed to trigger some laughs with his impeccable comedy timing and expressions.

Unfortunately, there were no scenes between Rajendra Prasad and Yogi Babu which was a big disappointment.

Tapsee looks stunning in both characters of Rudra and Annabelle, the latter being the most admirable one among the two. Her swordfight stands as the highlight not forgetting her combination scenes with Vijay Sethupathi, who created magic yet again with his flawless performance which stand as show stealers.

The intention of the writer-director Deepak Sunderrajan to present a wholesome entertainer was appreciable. Though there are some loopholes in the narrative as it’s too over-enthusiastic to search for logic in a film based on ghosts, some scenes fail to make the right impact due to laidback writing and lack of punchy oneliners.

The love story between Vijay Sethupathi and Annabelle was well-conceived and presented effectively which appealed a lot. The final cameo by Vijay Sethupathi was the silver lining that has lifted the film to newer heights.

Music by debutant Krishna Kishor was top notch with the songs creating the right kind of lighter mood for the film.

Ghosts, kings, and a potpourri of comedy mark Annabelle Sethupathi which can be watched once for all those star performers who have done a remarkable job in making this film a thorough entertainer.

‘Priyuraalu’ Review: A breezy story of love and extra-marital relationships

'Ankahi Kahaniya' Overview: This anthology on love was a pleasant watch