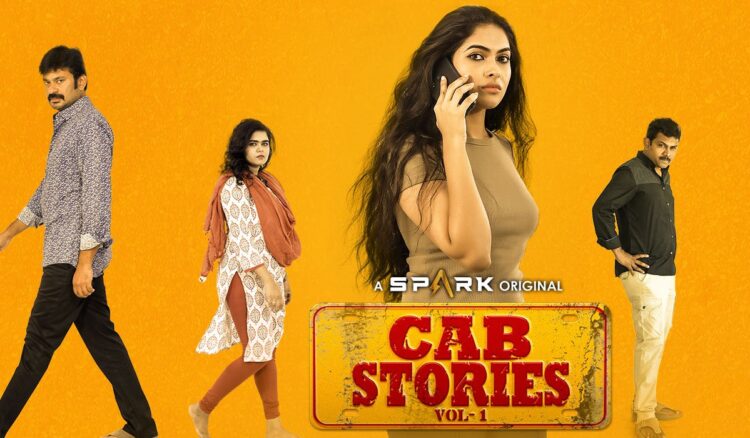 Spark OTT which forayed into the digital arena has made its debut with D Company of Ram Gopal Varma followed by Cab Stories Vol. 1, produced by Imagespark Entertainment, Shine Screens, and 2498 Studios which is streaming now on their platform.

Giri (Giridhar) is a cab driver who gets hold of a drug packet during one of his rides and this makes his life upside down.

His chance encounter with Shalini (Divi) spells more trouble for him as Shalini who is on the verge of disillusionment over a rift with his boyfriend Sagar (Srihan) sees herself at the centre of a wild goose chase.

A police constable Dhanraj too falls a prey due to his over enthusiasm and finds himself too at the receiving end because of Giri.

What is all this fuss about? How are these dots get connected and what happens to Giri and the drug packet is the flip side of Cab Stories.

Its overwhelming to see Giridhar in a full length role after watching him scores of times playing a second fiddle to the hero on the screen. He pulls out a superb performance and proves himself that he is worth enough to get more meatier roles.

Divi looked beautiful and acted well too but she needs to brush up a little bit when enacting the emotional scenes (though there were not many in this film). Her dance number which appears in the beginning as well as at the end exhibits her graceful dancing skills.

Dhanraj in a not so significant role was passable. Praveen is the other actor who runs away with the honours in a miniscule role but with a substance as a HR in-charge who was a synonym for harassment in the office.

On the other hand, Srihan did well but he needs to take care of his expressions a lot as he looked quite mechanical in all his scenes and that variation that existed in his character failed to reflect on his face.

Nandini as Sirisha, the friend of Shalini is the other girl who showed promise in this film and her scenes with Praveen spark a laugh riot.

Keeping some loopholes and a bit of logic aside, K.V.N. Rajesh has done a wonderful job by conceiving and executing a highly engaging film which was well made. The screenplay was smooth and the narrative was point blank without any extra baggage or over the board insinuations.

The editing by Tammiraju stands tall whereas the cinematography of Sujatha Siddharth was pleasant and the song was picturized well by  Sai Siram.          .

The music of Sai Kartheek though sounded loud on occasions dominated the proceedings on the screen but on the whole it contributed well to the narrative in an earnest manner.

Cab Stories was a well made film that was watchable and highly engaging.  This can be given a try by all means for its honest storytelling without deviating from the main storyline. No doubt, the next volume of this series promises to be even more bigger and thrilling than the first one.