by Pradeep Kamadana
in Entertainment
Reading Time: 8 mins read
A A
0 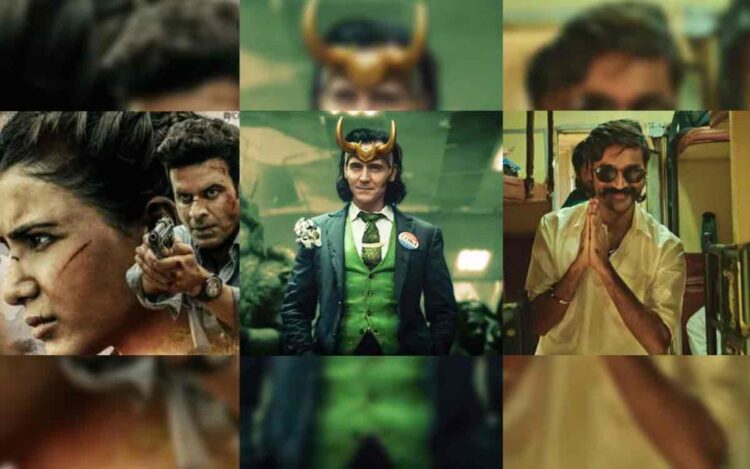 The month of June 2021 brings some highly anticipated projects on different OTT channels and each of one them is quite unique in both genre and content.

With the second wave of Covid-19 pandemic throwing the entertainment industry out of gear due to lockdowns across many cities and states, the digital channels stand in the front to provide the much needed entertainment to the audience during these troubled times with many interesting originals, shows, and series.

A list of such shows that can bring all the excitement and entertainment to the homes is presented to give a bird’s eye view of what’s there in store in the month of June.

Pick up your favourites among these and get ready.

Fans highly anticipate the release of Season 2 of the Raj & DK’s The Family Man. Manoj Bajpayee returns to his iconic common-man character Srikant Tiwari. The trailer has already surpassed 50+million views. This season also stars Samantha Akkineni as the lead antagonist. Despite all the controversy happening, season two is have everyone excited.

Where To Watch – Amazon Prime Video

After the success of Karnan, Dhanush’s next film, Jagame Thandhiram is opting for a direct OTT release. The teaser of the movie has more than 17+ million views on YouTube. Directed by Karthik Subbaraj, the movie was slated for a theatrical release in May but got cancelled due to the pandemic. The digital rights of the movie were acquired at 55 crores, making this the highest-paid OTT release and certainly one of the OTT releases to look forward in June.

The fifth installment of the Canadian sitcom Kim’s Convenience will be released in June. Based on a Korean family settled in Canada, Kim’s Convenience is a feel-good family sitcom. The television series also stars Simu Liu, who will be next seen in Marvel’s Shang Chi releasing later this year.

The talented comedian, actor, and performer Sunil Grover, makes his digital debut with Sunflower. The trailer of the series featured an ensemble cast. Ranvir Shorey, Girish Kulkarni, Ashish Vidyarthi and Mukul Chadda can be seen in the teaser. The plot will follow a murder mystery, with a quirky twist.

The second installment of this post-apocalyptic web series will premiere in June. Based on The Walking Dead, Black Summer follows an enthralling journey. Set in a Zombie inflicted world, the series presents an adventurous ride. The trailer showcasing some brutal battles with the Zombies has already created a buzz around.

Set in the village of Rajasthan, Skater Girl is a first of its type. Based on the story of a village girl, who wants to skateboard, Manjari Makijany, the director of the movie, presents the audience with the first-ever Indian film on skateboarding.

Dom narrates the journey of Pedro, a man from Rio De Janeiro. A Brazilian action-based web series, the plot revolves around Pedro, a middle-class boy, once an addict, who becomes the leader of a criminal gang. The series, apart from its original Portuguese audio, is also being released in Telugu, Tamil and Hindi.

The second season of this French mystery web series is going to be released in June. Based on a classic French story, Lupin will continue on Netflix, engaging its viewers. Lupin is one of the most-watched non-English series on Netflix.

An Adam Driver starrer horror-comedy, The Dead Don’t Die is a 2019 movie. The 1 hour 45 minutes long movie premiered at the Cannes Film festival. The Dead Don’t Die even stars Bill Murray, Tilda Swinton and Selena Gomez in the leads.

The Telugu version of the highly acclaimed Malayalam movie Kala will also be premiering on the Aha OTT platform on 4 June 2021.

Where To Watch – Aha

Date – yet to be announced

Where To Watch – Amazon Prime Video

13. Raya And The Last Dragon

This drama is set in the utopian world of Kumandra, a place where dragons exist. The 2021 animation drama will stream on Disney+ Hotstar Premium India. It’s one of the OTT releases in June with the least buzz but definitely not worth giving a miss.

Where To Watch – Disney+ Hotstar

Mortal Kombat is a 2021 movie based on a famous game with the same name. The fantasy action drama comes in with a hint of nostalgia. Mortal Kombat has some interesting special effects and action sequences to look forward to.

Starring an ensemble cast including Manoj Bajpayee, Kay Kay Menon, Ali Fazal and Harshvardhan Kapoor, the web series/movie will be an anthology. These anthologies are based upon the stories by Satyajit Ray. Hence, the name Ray. It would be a modern-day celebration of India’s revolutionary director and storyteller. If you are true fans of Indian cinema, this anthology is one of the releases which should be on your OTT watch-list this June.

(By special arrangement with www.yovizag.com)