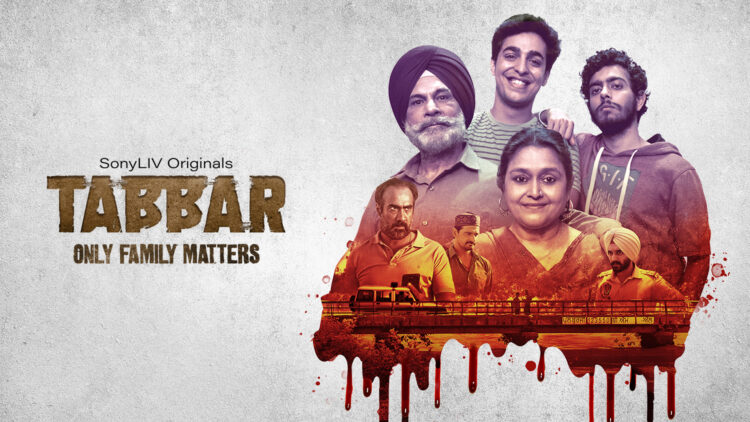 Family dramas with thrilling content are very rare and it needs a fair amount of grip on the subject so that both can be balanced evenly without disturbing the main storyline. Tabbar, a web series streaming now on SonyLiv platform is one such attempt that defines family bond against the vital backdrop of human relations, politics, and drug abuse.

Omkar Singh (Pavan Malhotra) and Sargun (Supriya Pathak) are a happy couple who love each other immensely. Their sons Happy (Gagan Arora) undergoing UPSC coaching in Delhi and Tegi (Sahil Mehta) makes it an ideal family until one untoward incident throws all their happiness to the winds.

It is now the responsibility of the ex-police officer Omkar Singh to keep his family safe from the challenges that come from politicians, police, and even his friends and neighbours.

How Omkar comes out of this maze of problems surrounding his family and saves his wife and sons from those challenges is what Tabbar is all about.

Pavan Malhotra is the main pillar of the series who handled the entire series on his shoulders with immaculate performance. He has proved that he is numero uno among the actors who can play any character with great perfection.

Supriya Pathak though brilliant in all the episodes, the final episode was the one that brought out the real talent in her. This one episode was enough to prove her outstanding versatility.

Ranvir Shorey was the other talented actor who can kill anyone with his looks and as a prospective MLA Ajeet Sodhi who lost his brother, his performance was par excellence.

Paramvir Singh Cheema as Police Inspector Lucky, Gagan Arora, Sahil Mehta, Nupur Nagpal as Palki, and Ali Mughal as Multan have given their best to give Tabbar the extra edge.

The taut writing by Harman Wadala, Sandeep Jain, and MR. Roy doubled by a gripping narrative by the director Ajitpal Singh were the hallmarks of this series.

It’s a herculean task to balance the thrill factor and emotional quotient and Ajitpal Singh was successful in maintaining the momentum without losing the direction or the intensity underlying the story. The drug angle was well exploited and the series was another stark pointer at the growing drug menace in Punjab and nearby areas.

Of course, Tabbar was not without its flaws which could have been avoided to make it more effective and appealing. The Dukki and her brother track was pointless and even the extension of the love triangle of Lucky-Palki-Happy had diluted the story a vee bit.

Another glaring omission was the absence of an arresting background score and Sneha Khanwalkar was the main culprit as it was found wanting many times during the course of the series.

The editing by Parikshhit Jha was laden with some abrupt jumps while the cinematography by Arun Kumar Pandey was excellent including the production designing.

An engaging thriller surmounted by true blue emotions was the crux of  Tabbar. Though there were shades of Drishyam, it was a sincere effort to showcase the love and emotional bond of parents towards their sons which was captured splendidly on the screen.

To top it, the performances of Pavan Malhotra and Supriya Pathak stand as the main highlight of this 8-episode series which deserves a watch.

'Sanak' Review: High-end action scenes are the mainstay of this routine hostage drama

'Sardar Udham' Review: A riveting saga of pain and sacrifice of a forgotten revolutionary