by Pradeep Kamadana
in Entertainment, Films, Reviews
Reading Time: 3 mins read
15
A A
0 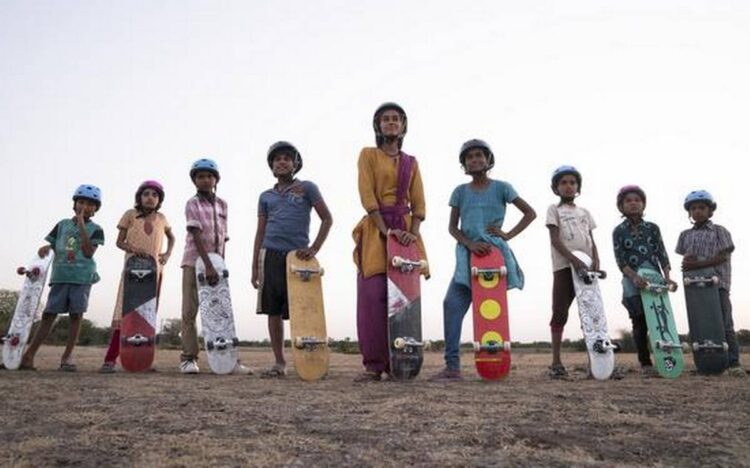 A heart touching story of love, tears, and triumph

There are handful of movies which come to mind as far as women in sports are concerned. Chak De India, Dangal, and Mary Kom are some which have succeeded in presenting the true spirit of women who have fought it hard to reach glory. Another addition to these inspiring sports dramas is Skater Girl, streaming now on the Netflix digital platform.

A sleepy village Khempur in Rajasthan is where the whole action takes place. Prerna (Rachel Saanchita Gupta) is a young girl who too had her dreams and aspirations and being born in a lower caste family, she need to oppress her desires. Her father wants to marry her off without any hassles which of course is the main agenda of any father of a young girl keeping in mind the situation around them.

A chance meeting with Jessica (Amy Maghera) who arrives from London to stay for a few days in the village change the fate of Prerna. Jessica and her friend Erick (Jonathan Readwin) introduces Prerna to the skateboard for the first time imparting new lease of life for Prerna.

From here on, Prerna took charge from a peanut selling young girl to a skateboarding champion her life undergoes a tremendous change infusing new inspiration for many boys and girls around her who now took to skateboarding as their main obsession

Rachel Saanchita Gupta steals the show by clearly and effectively conveying the emotional depth in her character. Her excellent portrayal of the character Prerna embedded with innocence, despair, love, and desire has given Skater Girl a definitive edge.

Amy Maghera too impresses and some scenes particularly where she clinches the deal while selling the concept of skate park to the investor, her performance stands out.

The presence of veteran actress Waheeda Rehman in a guest appearance has given more fillip to the film. Her incomparable presence and the scenes done by her elegantly have created the positive impact on the narrative.

Special mention should be made about Shafin Patel who played the kid brother Ankush of Prerna who has enlivened the whole narrative with his impeccable performance. No doubt, we shall see him more in future.

The director Manjari Makijany has scored a double by making Skater Girl as an emotionally absorbing drama that unraveled the trails and tribulations of an young girl who face challenges in the form of social discrimination and exploitation. Her screenplay along with Vinati Makijany was compact though ridden with clichés here and there which can be ignored going by the conceptual clarity and conviction that prevailed all through the storytelling.

The photography of Monic Kumar Gandhi and Alan Poon was spot on with some great visuals capturing the serenity surrounding a typical Indian village.

The soulful music of Salim-Sulaiman too fills the narrative with some good use of folk tunes that added authenticity to the proceedings on the screen.

The editing of Deepa Bhatia was on the mark and its crisp enough to drive the narrative without much drag or distraction.

Overall a sincere effort and Skater Girl was a heart touching story with love, tears, and triumph. The conviction of the makers was evident in every scene and their commitment got reflected in every frame. The fact that the set of skate park, The Desert Dolphin Skate park which was erected for the purpose of the shoot remained as a permanent construction open to the public speaks a lot about the determination that was present behind the making of Skater Girl which was highly appreciable.

Leaving aside the predictable tone of the film, Skater Girl is another film which acts as an inspiration to scores of young girls who are unable to pursue their dreams by overcoming various challenges and make it big in their lives. On these lines, Skater Girl is an outright winner!