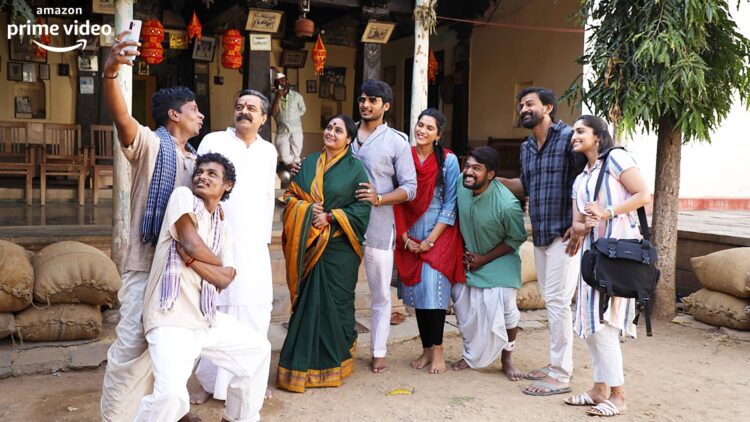 The love of a mother is eternal and it surpasses all kinds of love due to its sheer selflessness and being truly unconditional. Many stories were churned out on this love and more films are made eulogizing the love of mother like Pichaikkaran which went on to become an icon among films on mother’s love. Rathnan Prapancha streaming now on leading digital platform Amazon Prime Video presents the love of a mother and the quest of a son to find the love of his real mother.

Ratnakara (Dhananjay) who works in an insurance office gets frustrated by the overflowing love of his mother Saroja (Umashree) whose tantrums make his life miserable.

On one fine day, Ratnakara receives a phone call from the journalist Mayuri (Reba Monica John) that gives him the big shock of his life. Now Saroja turns into evil before him as he embarks on a journey in quest of the truth about his birth.

What is Dhananjaya up to and will he succeed in his journey to find out the truth is the remaining story of Rathnan Prapancha.

Full marks to Dhananjaya for his honest portrayal of the character of Ratnakara. Though tend to get overboard in the initial stages of the film, he has started to maintain his composure and has given his best as the film progressed.

Umashree is the other actor who has managed to cast a spell within a short time with her flawless performance as the mother who cares and loves his son wholeheartedly. It was quite funny to watch some of the histrionics which were very well enacted by her.

Shruti as Yellavva is another character who made her presence felt in a shorter screen time with her perfect performance that touches the heart.

The character of Reba Monica lacks the depth except for limited number of scenes while she was with her mother. Nevertheless, she fared well as a girl with high self-respect and as a true companion to Ratnakara.

Next, it is Pramod Panju as Udaal Babu Rao who takes the cake as far as performance was concerned.

Other actors, Vainidhi Jagdish as Benni, Ravishankar Gowda as Ahmed Ali, Anu Prabhakar as Tabassum, and Achyuth Kumar as Basappa have shown their excellence in respective characters despite their limited screen time.

Rathnan Prapancha raced with great speed till the Kashmir track got wayward later and bogged down beyond the imagination for an excruciating 147 long minutes.

The director Rohith Padaki who showed a spark of brilliance in selecting the premise and introducing the concept on the screen initially has lost the direction completely after halftime and turned it into a big mess except for the heartrending climax. It’s like Rohith has went for a long stroll in between the beginning and climax leaving the film to its fate.

The Kashmir episode was more like a travel documentary that captured the snow-capped terrains and the stunning frames presented by cinematographer Shreesha Kudavalli were a feast to the eyes.

The music composition by Ajaneesh Lokanath was of top quality with some good foot-tapping tunes.

The editing by Deepu S Kumar should have been sharper as there were many unwanted scenes that resulted in slowing down the momentum of the narrative.

A sound premise that was a delectable deflection of mother’s love sums up Rathnan Prapancha. A little care in the narrative without letting it take its course would have made this film a bigger hit with the audience.

Also, the length gets unbearable and when our film makers come out of this over 120-minute syndrome, then we can expect more compact films filled with crisp and appealing narrative otherwise value addition attempts like Rathnan Prapancha which look good on paper get lost in the bing.

Pawandeep and Arunita step up their chemistry with ‘Manzoor Dil’

Did you watch these horror flicks this Halloween?