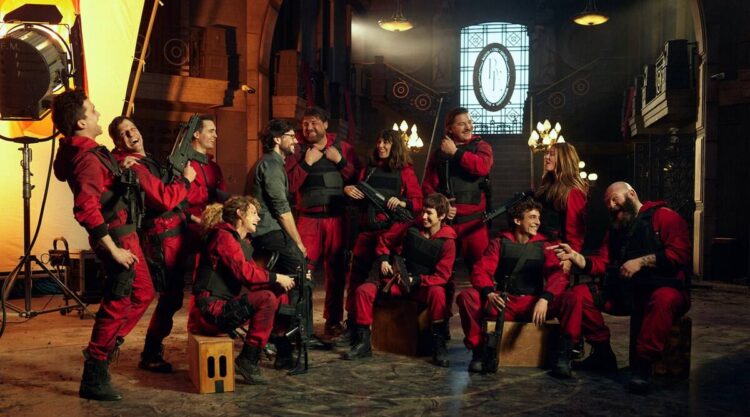 Amidst the Covid-19 related delays the shooting of the most awaited and anticipated Spanish web series Money Heist Season 5 has wrapped up its shooting on Friday.

The final day marked with emotions and joy culminating into a final good bye from the team who were captured during a candid moment by the streaming giant Netflix.

The Season 4 of Money Heist rather ended on a victory note for the team as Lisbon was freed from jail and joins the heist team inside Bank of Spain, as its gold which has to be pulled out this time. Who will be the winner and who are going to survive will be known in the Season 5.

The creator of the series shared in a statement with all the excitement, “We’ve spent almost a year thinking about how to break up the band. How to put the Professor on the ropes. How to get into situations that are irreversible for many characters. The result is the fifth part of La Casa de Papel. The war reaches its most extreme and savage levels, but it is also the most epic and exciting season”. So its going to be a great finish off in the end.

Money Heist Season 5 will stream on Netflix during the last quarter of this year and it’s poised to unleash loads of thrills and wholesome entertainment.

What started as a heist, ended as a family.

Thank you to all the fans for being part of La Resistencia! We can’t wait to show you how this story ends. pic.twitter.com/ey2TuEZENh