‘Helmet’ Review: Falls short of expectations despite the comedy touch 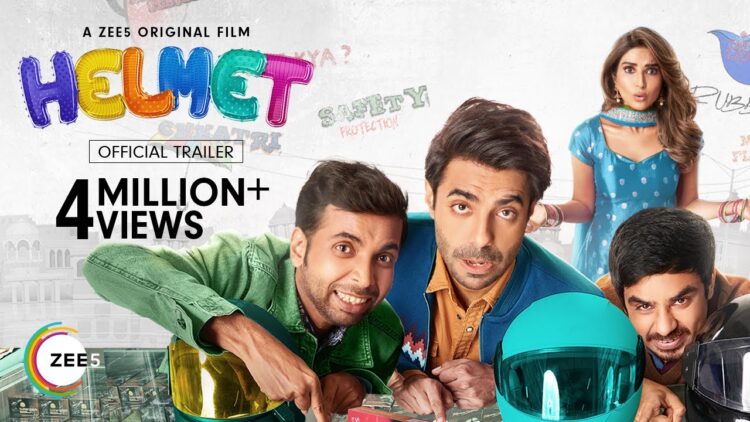 Nowadays the socially relevant themes are being transformed into movies by adding a dash of comedy. While some like Vicky Donor or Pad Man have become successful including Shubh Mangal Saavdhaan for touching sensitive subjects, some have bitten the dust due to various reasons.

One more film which dwells on another sensitive subject like safe sex, Helmet is now streaming on Zee5 which follows similar lines driven by a beaten track of combining comedy with the social message.

Set in a town by the name Raj Nagar, Lucky (Aparshakti Khurana) was a wedding band singer who falls in love with Rupali (Pranutan Bahl) who makes floral arrangements for weddings.

While Lucky finds it difficult to convince Rupali’s father (Ashish Vidyarthi) about his love due to his social and economic status, he hatches a plan to get richer by roping in Sultan (Abhishek Banerjee) and Minus (Ashish Varma) to help him steal goods from a truck which was supposed to contain electronic items but in its place condoms appear to the dismay of Lucky and co.

Now Lucky had a task on his hand to dispose off those truck load condoms by spreading awareness about their usage and how he has achieved this task and how he managed to win his lady love against several odds is the remaining part of Helmet.

Aparshakti Khurana who finally got a meaty role after playing a couple of supporting characters earlier in films Dangal, Stree, and Luka Chuppi has proved his mettle by donning the role of an unconventional protagonist.

Pranutan Bahl also excelled in her character of Rupali while it’s Abhishek Banerjee and Ashish Verma who steals the show with their comic timing and the latter in particular was a delight to watch in the character of Minus.

The director Satram Ramani and the writer Rohan Shankar has got a high five first for their selection of a story that had an underlying message that is quite relevant and necessary in present-day circumstances especially in a country like India where things about safe sex or condoms cannot be discussed openly.

But the way the narrative was dealt with was highly disappointing. It deserves more pruning and polishing as it falls short of expectations despite the comedy touch and over-the-top performances by all the actors.

The camera work by Milind Jogi was excellent and the beauty of Varanasi was captured quite well by the lensman.

Music by Dipanjan Guha was passable except for the song ‘Mauka Mauka’ rendered by Shubham Shirule while all others are quickly forgettable.

It’s a tight rope walk to deal with comedy and social message together as it requires a lot of caution in writing and presentation. Helmet suffered on this front that led to jinxed writing and faulty narrative.

While the intentions of the producer, Dino Moreo need special mention who wanted people to start talking about condoms after watching Helmet, which was somewhat far-fetched, he has scored a major by bankrolling a socially relevant subject that could go well with some section of the audience despite its flaws.

Helmet can be given a try for some hearty laughs brushing aside other aspects.