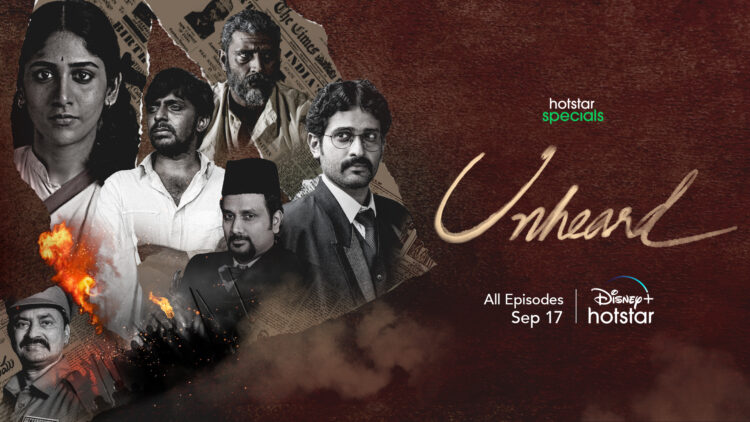 India has witnessed many unsung heroes and unravelled many unheard stories during its independence struggle. One such story that took place during the days of Nizam in Hyderabad is the backdrop for the web series Unheard that is ready for streaming by Disney+Hotstar, the leading and most popular digital platform.

The tyranny of Nizam and rebellion against ‘Razakars’ will be highlighted in the period drama being produced by Radhika Lavu under Ellanor Films who earlier created a benchmark with the amazing web series G.O.D. (Gods Of Dharmapuri) in 2019 which is available on Zee5.

Unheard is directed by Aditya KV with music by Naresh Kumaran, and photography is by Abhiraj Nair. Disney+Hotstar released the first look and teaser of the series on microblogging platform Twitter with a caption “As a nation seeks to be born, the common men and women of Hyderabad stand witness to the largest human struggle to break the chains of bondage”- which sums up the whole gist of Unheard.

Ensemble star cast makes the expectations on Unheard reach new heights. Chandini Chowdary, Priyadarshi, Avasarala Srinivas, Ajay, Baladitya, and Chakrapani will be seen in significant roles. The versatility and efficacy possessed by these actors will provide an extra edge to the series.

Vice President of India M. Venkaiah Naidu is in awe of this series and his words of encouragement to the team of Unheard speaks about the hard work put in by them in making it a masterpiece that “poignantly captured the trials and tribulations of common people in Nizam’s Hyderabad and their penchant for Free India and Hyderabad’s integration with such India,” according to the Vice President.

The teaser of Unheard released by the streaming giant Disney+Hotstar is packed with a lot of emotional elements and thought-provoking scenes that throw light on the struggle faced by the people and their quest for freedom.

Unheard will be streaming on September 17, 2021, by Disney+Hotstar which is launching its maiden original web series in Telugu. Let this beginning be a stepping stone to many victories in the future!

'The Baker And The Beauty' Review: Oddities galore in this whimsical love triangle