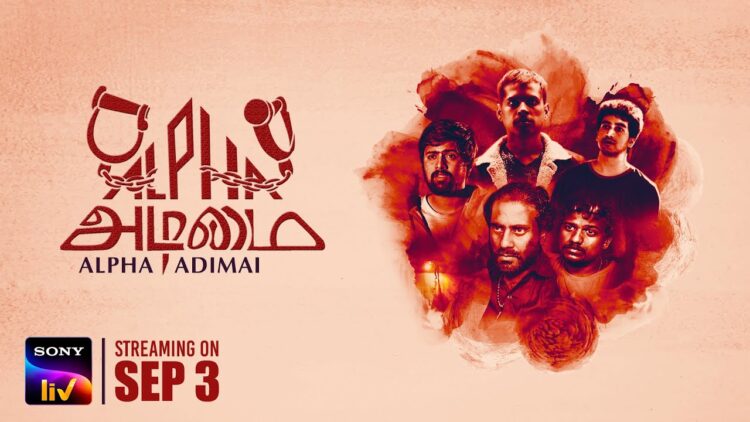 Some films with smaller expectations make it big with their impressive storyline and absorbing narrative. One such film is Alpha Adimai which is streaming now on the digital platform SonyLiv.

Both want to celebrate the party on a different scale with weed. They get their supply from the small-time peddler Mayilsamy (Kalki) and his accomplice brother Aaru (Jinovi). After collecting the weed from Aaru, Dheeraj and Vicky land up in trouble tumbling them into the fire from the pan.

Now Mayilsamy gets targeted and how he along with Aaru and his smartest yet dangerous Assistant Ponnan (Eeshwar) outwits everyone in this game of run, chase, and kill is the remaining story of Alpha Adimai.

There are three principal characters in this 98-minute long film. Mayilsamy, Aaru, and Eeshwar and all the three, Kalki, Jinovi, and Eeshwar have breathed life into these characters. Otherwise, Alpha Adimai could have joined the list of another run-of-the-mill thriller.

Eeswhar and Jinovi were a shade above Kalki as they got different mannerisms and body language which synced well with the narrative.

That guy Eeswhar was unbelievable in a character that comes as a big surprise and he succeeds in playing it to perfection like a seasoned actor.

Alpha Adimai has once again proved that nothing matters much when one has got a gripping and unique storyline. The simple and straightforward narrative by the director Jinovi was another highlight of this film apart from the performances.

Jinovi’s belief in the script and his expert taking was evident in every frame and the way he devised the plot without any aberrations or extra frills was remarkable.

Though made on a shoestring budget with the support of like-minded young people, Alpha Adamai has won accolades in several film festivals and won the Best Debut Feature Film Award in the Indus Valley Film Festival without any reason. It deserves more attention, recognition, and even much more adulation from the viewers who will have a glimpse of filmmaking at its best.

There are no stars, no high budget gimmicks, and no usual commercial elements but still, a film can be made and achieve success. The example was Alpha Adamai, a rollicking thriller that keeps the viewers hooked all through the film with impressive storytelling and true to life performances.

‘Helmet’ Review: Falls short of expectations despite the comedy touch

'Helmet' Review: Falls short of expectations despite the comedy touch