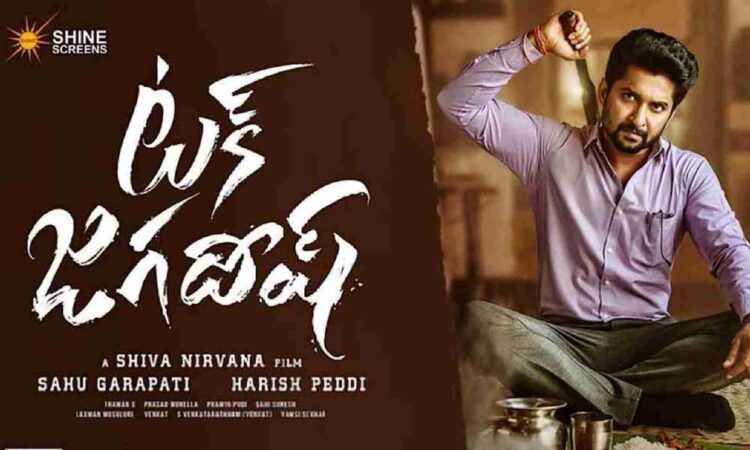 We have seen many films centered on family feuds and rivalry between two different families in the past. The list of those films goes countless till the recent one Chinna Babu that was made on the same subject of family relations. Tuck Jagadish also dwells on the same outdated premise of family bond and rivalry between two families which is streaming now on ace digital platform Amazon Prime Video.

Set in a village Bhudevipuram, the enmity between the peace-loving Adisesh Naidu (Nasser) and the distinctly opposite Veerendra (Daniel Balajee) who wants to settle scores through the means of violence.

Both the sons of Adisesh Naidu, the elder son Bose Babu (Jagapathi Babu), and the younger one Jagadish (Nani) enter into a conflict mode after the demise of their father due to a property feud between them.

How Jagadish thwarts the attempts of Bose Babu on one hand who wants to lay his hands on their property and Veerendra who is on a land-grabbing spree on the other hand is the main story of Tuck Jagadish.

Nani true to his Natural Star image performs as expected but due to the predictable storyline, his character lacks the newness, as a result his performance looks stereotyped. His mannerisms and body language follow the same pattern as displayed in his earlier films which he needs to avoid in the future.

Jagapathi Babu too was seen in a similar character umpteen times and there is nothing new in his character which he played in his signature racy style.

Ritu Varma though looked beautiful doesn’t have much to do and she is such a wonderful actress who got wasted in this film due to poor characterization.

Aishwarya Rajesh too meets the same fate and falls prey to a poorly written role as there was nothing much to do for her and she was wasted in a not-so-important character.

Other actors, quite plenty of them like Rohini, Naresh, Praveen, Devadarshini, Rao Ramesh, and Parvathi fare well despite loopholes in designing their characters.

Shiva Nirvana is a director with potential as proved in his earlier outings, Ninnu Kori and Majili but when it came to Tuck Jagadish, the spark in him went missing. The poor story selection that offered nothing new and a shoddy screenplay has become the stumbling blocks for the film.

Though the ‘Warning Scene’ was well-conceived and presented, it could not contribute much to the narrative.

Except for the background score of Gopi Sundar which tried to inject some freshness, the songs composed by Thaman fail to strike any chord on the screen.

Another positive aspect was the appealing photography by Prasad Murella who has done a commendable job that gave some kind of edge to the otherwise dull and drab narrative.

The editing of Prawin Pudi was off the mark and should have easily chopped more than 20 minutes of this 148-minute long ordeal.

The makers have taken a wise decision to release Tuck Jagadish on OTT as there is a chance of more people watching the film rather than in theaters because of the lacklustre story telling.

An outdated storyline and sloppy narrative mar this family drama which offers nothing new as everything takes a predictable mode whose length eventually testing the nerves. Watch this at your own risk that too if you are a hard-core Nani fan.

'The Baker And The Beauty' Review: Oddities galore in this whimsical love triangle

'NET' Assessment: A placing revelation concerning the evils of voyeurism