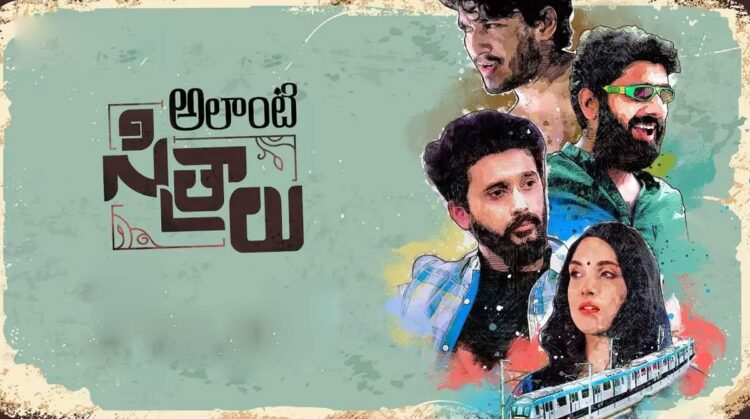 The boom of OTT these days has brought out many hidden talents into the limelight. Many young directors are utilizing this opportunity to the core by giving wings to their creativity. Alanti Sitralu, streaming on the leading digital platform Zee5.is one such film which had many newcomers and looked quite promising at the outset.

Five characters who have different identities play a major role in the story. Dileep (Prawin Yandamuri), the wanderer, Yash (Ajay Kathurva), the loser, Pallavi (Shwetta Parashar), the suffering sex worker, Raag (Yash Puri), the confused youngster, and Yamini (Tanvi Akaanksha) a sincere lover were the characters who appear in this film.

In addition, Yash and Raag had a common father played by Sridhar which constitute another angle to  the story of Alanti Sitralu.

What is the final connection between these characters and how do they cope up with the challenges in their lives is the story of Alanti Sitralu.

None of the actors, most of them were newcomers who were in the lead roles got registered due to their pathetic performances doubled up with dismal characterization. Only Prawin Yandamuri had shown some promise but it’s a long way to go for him as he was found wanting in many scenes due to his blank expressions. They all need to hone their acting skills considerably by doing unrelenting hard work if they seriously want to pursue acting as a profession.

The writer-director Supreeth C Krishna had a fairly good story in hand with many subplots and several character arcs. The selection of such a complicated story was the primary blunder as the whole story was screwed up so badly that after fifteen minutes into the film everybody wants this ordeal to end as quickly as possible as sitting through the entire duration of 142 minutes of the film was quite painful.

What does the writer-director want to prove with this film was a million-dollar question as every character was left high and dry without any purpose or logical conclusion to it. As a result, every character looks like an unfinished puzzle from starting to the end.

Can you please explain Mr. Supreeth why the boxing coach keeps on coughing as if he is doing a cough drop ad throughout the film? What did you want to convey by making poor Ravi Varma cough like that?

The photography by Karthik Saikumar was amateurish and did nothing except panning the metro station and metro rails with great devotion.

The music by Santhu Omkar was another big let down and those songs with lyrics by Lakshmi Priyanka were ear-blasting and doesn’t add any value to the nosediving narrative.

The editing by Ashwath Shiva Kumar was substandard and those jarring cuts and jumps between scenes were annoyingly distracting. The whole length of the film should have been easily shortened by at least 20-30 minutes.

One of the most sloppy and prolonged ordeals in recent times was this Alanti Sitralu. Avoid this by all means otherwise, it would be a frustrating watch that leaves you yawning throughout the film and by the end, you will slip into a deep slumber.