by Snooper
in Entertainment, Reviews
Reading Time: 2 mins read
A A
0 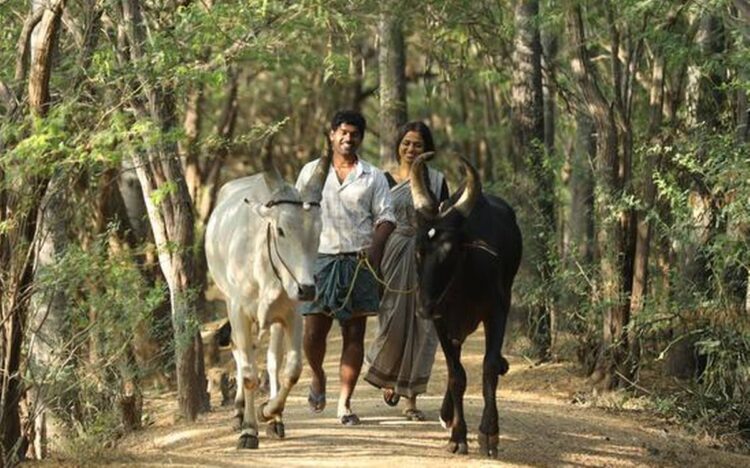 One of the major releases from the 2D Entertainment of Suriya and Jyothika, Raame Aandalum Raavane Aandalum (RARA) is the first of the four films that are streaming on OTT platform Amazon Prime Video this year.

Political dramas are a hard nut to crack as they require a lot of balance without getting over the board diluting the very essence of the story. Raame Aandalum Raavane Aandalum (RARA) is one such political drama that depicts various contemporary issues with a dash of reality.

Kunnimuthu (Mithun Manickam) and Veerayi (Ramya Pandian) were married for four years and they have two bulls which are nothing short of their children. The bulls, Karuppan and Vellaiyan go missing one day triggering a series of incidents in the lives of the poor couple.

Set in village Poocheri, the complaint made by Kunnimuthu and Veerayi takes back a seat and the whole political imbroglio unfolds. The local issues like water scarcity, games played by politicians, corruption, TRP frenzy media, among many others continue to hold the sway.

Mithun Manickam in a meek and kindhearted character of Kunnimuthu and Ramya Pandian in a level-headed and emphatic character Veerayi gave splendid performances which were the main highlights of RARA.

In addition, Vani Bhojan as the righteous journalist Narmada steals the show with her screen presence and performance that augured well with the narrative and played a major role in driving the narrative forward.

The director Arisil Moorthy has got it right in the form of the script but when it came to execution, he faltered giving the whole film a preachy look which was the major drawback of RARA.

While the issues like corruption, vote bank politics, and many others were touched, the lack of emotional depth proves to be too costly as the viewer feels detached from the proceedings on the screen.  Also, the flimsy climax adds more to the cup of woes and it’s where the director could not play all his cards effectively.

The music by debutant Kishh fares well but it could not provide the support required by the tottering narrative.

The lack of emotional depth in this loud political drama RARA could be given a try if you are good enough with the political genre films. But it will be disappointing for all others who expect more out of this film. Give it a try for the performances of Mithun Manickam and Ramya Pandian who were the saving grace of the film.