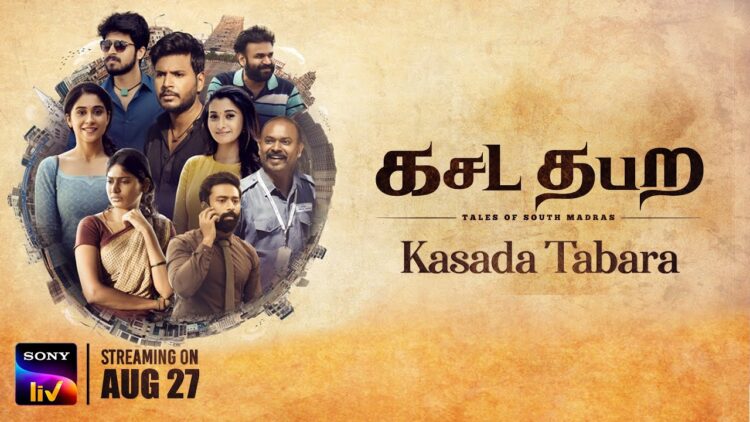 The journey of life is full of unexpected turns and goes through several bumps on its way. This is the main theme of the latest offering Kasada Tabara from the leading digital player SonyLiv which is now streaming on their platform. Kasada Tabara was jointly produced by Venkat Prabhu and R. Ravindran under the banners Black Ticket Company and Trident Arts respectively.

‘Vantage Point’ and ‘Butterfly Effect’ form the backdrop of the story which starts with the voice-over explaining these two theories. All the six stories have different players but get connected through various incidents as a part of the ‘Butterfly Effect’ which is nothing but a single incident leading to a chain of several incidents that take place somewhere else.

The first story Kavasam (‘Shield’) features Trisha (Regina Cassandra) and Bala (Premgi Amaren) getting smitten by love but a sudden twist in the course throws everything topsy-turvy that kickstarts a series of incidents that had cumulative effects on the whole story.

This was followed by Sadhiyaadal (‘Conspiracy’) which revolves around the gangster (Sampath Raj) and his son (Shantanu). It’s all about the love of the father towards his son but in the end, it turns out to be something odd and different where the son turns into a villain.

Next, is the story of a cop Kandha (Sundeep Kishen) who gets entangled in the web of encounters branding him as the murderer in the eyes of his wife Kanmani (Priya Bhavani Shankar). The repercussions of his encounters of the gangsters create ripples elsewhere disturbing not only his marital life but also sparks off a series of events.

The fourth one, Pandhayam (Betting) is about a crook Kish (Harish Kalyan) who lures Issac (Shatanu Bhagyaraj) into doing business that catapults Kish to the centre stage but he has to pay a heavy price in the end for endangering the lives of thirty young children which proves to be his nemesis.

Sundari (Vijayalakshmi) fights against all the odds to save her young son and her unflinching bravery ends up in saving the lives of thirty children but not before passing through various obstacles which she wards off single-handedly in the penultimate story Aarampattra.

The final story dwells on Samyuthan (Venkat Prabhu) who has to face the music as he gets falsely implicated in a case to save the face of his boss leaving his wife Amudhini (Sija Rose) and children in jeopardy in Akkara (‘Care’).

There is one linking factor for all these stories that play the actual key role in triggering many incidents and it needs to be found out only by watching Kasada Tabara.

There were some amazing performances by all the actors. In particular, maximum marks go to Vijayalakshmi for portraying the difficult character of Sundari who overcomes several hardships with her unmitigated determination and willpower.

Though faltered at times while presenting, Chimbu Deven, the director showed his craftsmanship in his narrative style which was the redeeming feature of Kasada Tabara.

His adaptation of stories with different palettes, aspects and colour hues was simply remarkable and helped a lot in enhancing the respective mood of a particular story to the core.

Chimbu Deven’s effective handling of a complicated story without drifting away was the vantage point of Kasada Tabara, an impressive multi-dimensional anthology around ‘Butterfly Effect’.

There is no reason to miss this as it had some excellent performances from the ensemble star cast laced with some interesting storytelling which were the hallmarks of Kasada Tabara.