‘Dial 100’ Review: An emotional thriller with a difference 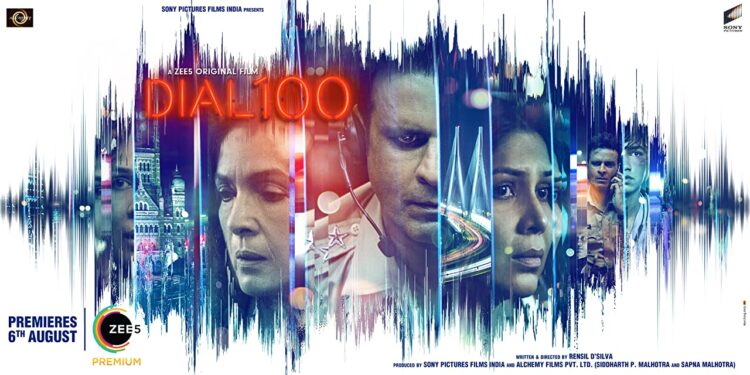 Dial 100, a Sony Pictures Films India and Alchemy Films Pvt Ltd presentation streaming now on the multilingual digital platform Zee 5 is the film about a mother who seeks justice for the wrong done to her son who lost his life in an accident.

Nikhil Sood (Manoj Bajpayee) is a Senior Inspector in the Mumbai Police Control Room which handles the calls made to the emergency number 100. His wife Prerna (Sakshi Tanwar) was worried about their teenage son Dhruv (Svar Kamble) as he was involved in drug peddling and requests Nikhil to take care of him.

Nikhil who gets perturbed by the attitude of his son gives a stern warning to mend his ways. Meanwhile, he gets a call from a stranger and the irony behind this call makes him more puzzled. Subsequently, this call turns out to be a nightmare for him as he gets under the scanner of the mysterious caller. Who is behind this call and what is the motive of the caller needs to be known only by watching Dial 100 as any further revelation about the plot will turn out to be a spoiler.

There is nothing new to write about Manoj Bajpayee or his performance as he keeps on delivering one after the other with amazing results that speak a lot on the screen. So was the character of Nikhil Sood portrayed by him with great perfection giving the character a touch of authenticity.

Sakshi Tanwar looked quite convincing as the loving mother and as the wife who castigates her husband for not taking care of their son properly.

Neena Gupta is an apt choice for the role of a mother who seeks justice and tries to deliver it with a fair amount of success for the loss she suffered at the hands of law and bureaucracy.

Svar Kamble too has done well in a pivotal role while Abhijeet Chavan, Urmila Mahanta, and Vikram Bham, along with all others have done justice to their characters.

The writing and execution of Rensil D’Silva were simple, straightforward but at the same time gripping too without giving room for typical flashback moments and this makes the whole difference.

He was able to capture the emotions behind the love for a son in a heart-touching manner. Above all, the way he has wisely balanced the thrills and emotions deserves a big round of applause.

The background score by Raju Singh and the sound designing by the award-winning Resul Pookutty along with Amrit Pritam require special mention for the richness it provided to the narration without any jarring.

The photography by Anuj Rakesh Dhawan and editing by Asif Ali Shaikh are the other assets of the film.

Dial 100 is an emotional thriller with a difference and its shortest run time of just 104 minutes makes it highly watchable for its treatment rather than the storyline which was similar to Jimmy Sheirgill’s web series Your Honour.

But comparisons apart, this can be given a try to see some refreshing performances by Manoj Bajpayee, Neena Gupta, and Sakshi Tanwar that validate the brighter side of  Dial 100.

‘Navarasa’ Review: A heartful of emotions that embarks on a bumpy ride

'Spin' Overview: A pleasant treatise on a teenage lady's desires and aspirations