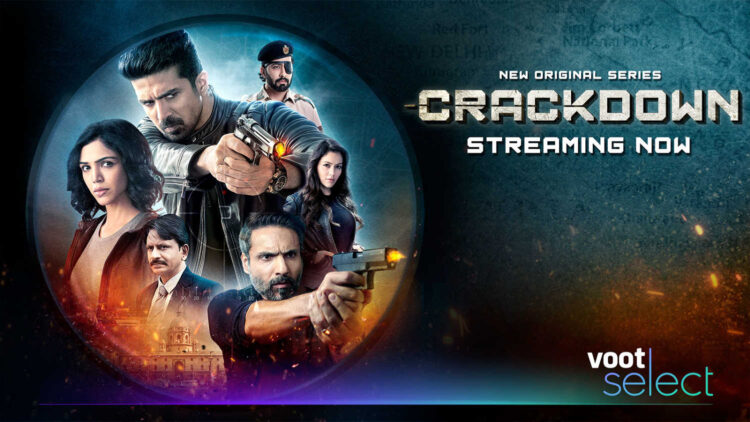 State-sponsored terrorism spreads its tentacles across our borders infiltrating into our security agencies creating a serious threat to the lives of our people and posing a big challenge to our agencies like RAW. This is the basis of the latest web series Crackdown which is streaming now on Voot Select.

Riyaz Pathan, RP (Saqib Saleem) an agent of RAW who is a specialist in covert operations eliminates two dreaded terrorists sponsored by ISI. Zorawar Kalra (Iqbal Khan), the Deputy Director of RAW who cannot digest the upper hand gained by Ashwini Rao (Rajesh Tailang) the Chief of RAW, and his trusted aide RP defers with the operation resulting in a series of spats.

Mariam alias Diyva (Shriya Pilgaonkar) takes part in a secret operation with RP but gets stuck neck-deep in the vicious circle throwing her life into danger in the wake of threats from many quarters.

After some shocking twists, the story now shifts to major terror attacks planned by sleeper cells of terrorist organizations across the national capital triggered by a blast killing many people.

Now RP and his team along with Zorawar have to fight it out by sinking all their differences to save the country and its people from more attacks by terrorists who are on the verge of another major strike.

The remaining part of Crackdown is about how RP, Zorawar, and Divya go about their mission to thwart the attempts of terrorists culminating into a nail biting climax.

This series undoubtedly belongs to Saqib Saleem and Shriya Pilgaonkar.

Both have given their best to lift the series to the next level. Saleem adopts a different style and looks which made his character of a sincere, fearless, and efficient agent of RAW look more appropriate and effective on screen.

Shriya appears in an altogether different character with multiple shades. From an ordinary Mehndi designer in Mumbai to a strong fighter, her performance is one of the best so far in her career if it’s not exaggerated. All the hard work she has put in to make her character look authentic and flawless is visible in every frame. She deserves all the accolades for exhibiting those fighting skills which are quite exhilarating.

Rajesh Tailang, Iqbal Khan, and Waluscha De Sousa, in a significant character Garima are remarkable in their performances.

All other actors Ankur Bhatia as Tariq the ISI man, Harry Parmar as Narang, and Ram Menon as Max too are excellent in their roles which are shorter but quite important for the flow of the narrative.

It’s a simple, normal, and routine story around terrorism which is the central theme for many films and series made earlier. So it’s not an earth-shattering story at all. Keeping the story aside, the treatment given to a routine and oft-repeated storyline by the Director Apoorva Lakhia and Suresh Nair (who has written the screenplay) is mind-blowing.

The excellence and experience of Lakhia are seen in every shot and he is the real strength behind Crackdown who transformed this ordinary story into a highly watchable and entertaining thriller. The two main twists, one in 4th episode and another one in the penultimate episode are enough to prove the brilliance of this master storyteller.

The background score of Amar Mohile stands as another asset of Crackdown for providing extra pace to the whole series.

The photographer, Fasahat Khan has effectively captured all those action scenes and his crispy visuals have added extra glow to the narrative.

Not many loose ends except some cinematic liberties evident in the form of a prolonged climax fight and over the board spat between the trio, Zorawar, Ashwini, and RP could have been trimmed down to present a compact and more slicker look to the series.

Hopefully, the untapped chemistry between RP and Divya will be explored in the next season which is not ruled out as the terrorists are still at large with the lives of many people in the air at stake.

Apart from these minor blemishes, Crackdown is thoroughly enjoyable and entertaining with pulsating action sequences laced with brilliant screenplay and equally captivating execution by Apoorva Lakhia not to forget about towering performances by Saleem and Shriya which are cut above the rest.