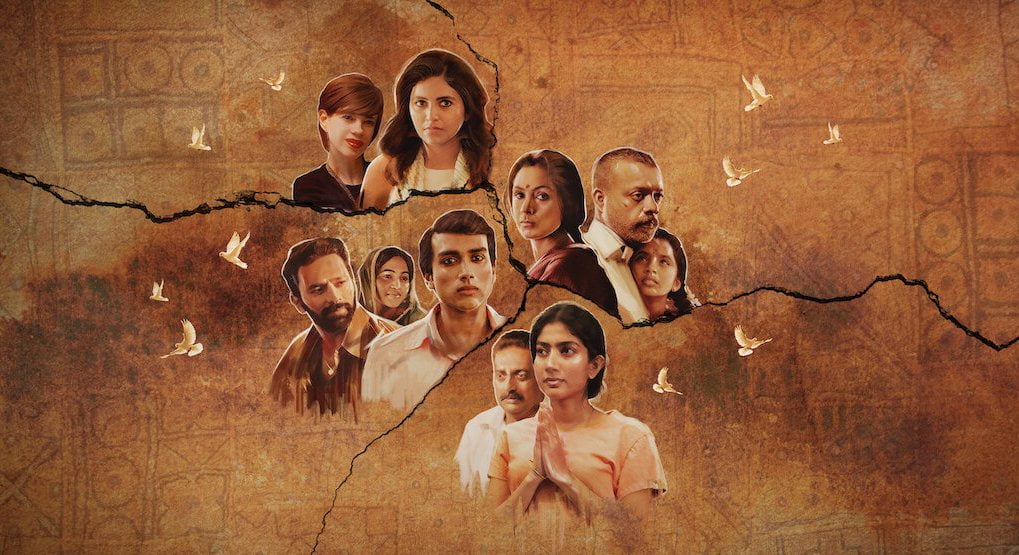 We are in a land that has seen many evil practices like Sati, Child Marriages, and female infanticides. It took ages to eradicate practices like Sati due to relentless fight by many progressive-minded people. But unfortunately, the inhuman practices of female infanticide and child abuse continue in many parts with new unethical practices emanating in the name of pride and honour as indicated by recent incidents that took place across the country. Paava Kadhaigal streaming now on Netflix in Tamil, Telugu, and Hindi languages is an anthology of 4 stories that focus on this evil of honour killing which is nipping the young lives in the name of pride and power.

The trans genders are still being ostracized in this modern society and Sathar (Kalidas Jayaram) is one such trans whose childhood friend Saravanan (Shantanu Bhagyaraj) falls in love with Sathar’s sister Sahira (Bhavani Sre). Sathar sacrifices his feelings for Saravanan and helps the lovers to elope as a result Sathar faces ostracization from the family and meets with a tragic end.

This story written by Shan Kuruppusamy reflects the plight of a transgender which was presented brilliantly on the screen by the director Sudha Kongara who has effectively captured the grief and despair of Sathar in its true-to-life perspective. Added to this, the blemishless performance of Kalidas Jayaram as Sathar leaves an indelible mark as anyone who watches the plight of Sathar tend to shed a tear or two.

Veerasimman (Padam Kumar) supports marriages of same caste, creed, and community. But his twin daughters Aadilakshmi and Jothilakshmi (Anjali) have different ideologies that could not gel with Veerasimman as a result he tries to get rid of his daughters in the name of honour but one of his daughters prove to be smarter than him and escapes from his clutches in the end.

The director Vignesh Shivan’s depiction of this tale has a slight overdramatic tone which has diluted the main theme otherwise the presence of the stellar star cast like Anjali, Kalki Koechlin, Jaffer Sadiq, and Padam Kumar have breathed life into this not so appealing plot.

When a 12-year old daughter gets abducted and brutally raped, the agony and grief of her mother Mathi (Simran), and father Satya (Gautham Vasudev Menon) are very well captured in this short story. High on emotions, this story ends on an unpredictable note sending shock waves to the civilized society in turn raising many questions on child abuse and atrocities on young children.

Gautam Vasudev Menon is one story writer and director who makes films with equal passion irrespective of the size of the canvas. He shows the same commitment and determination in this short film also which is something adorable and worth emulating by all directors.  His efforts are supported by the remarkable performance of Simran who appears on the screen after a long time and her acting prowess remains intact though she may look a little older than yesteryears.

A young pregnant daughter who is personally invited by her estranged father to come home for the celebration of baby shower never expects that something wrong is going to happen at her own home. Sumathi (Sai Pallavi) comes back home for celebration accepting the request of her father Janakiraman (Prakash Raj) after she parted ways with her family following her elopement with a man of different community. The caste and community are more important than anything for Janakiraman due to which he turns into a devil in disguise who goes to any extremity to safeguard his pride and honour.

The narrative of Vetrimaaran in this not so new plot is the significant feature of this short film which engages the viewer all through with a gripping screenplay. The mood, the characters, and the characterization are the highlights which elevated this film. Also, the message it conveyed is highly relevant and happening in many places as the family members are turning into villains who resort to honour killings in the name of pride not realizing the amount of trauma they are causing for many families.

All four stories are heart-rending tales of love, pride, and prejudice depicting the modern-day evil practices that are still ruling the roost despite advances toward globalization and digitalization.

A not to be missed watch for all parents who are having daughters, Paava Kadhaigal emphasizes the need for more compassion, love, and understanding in place of hatred, honour, and hostility which are more important for the development of any community or society.