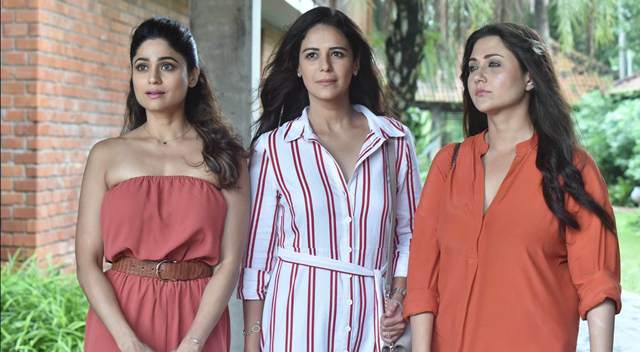 A remake of the same name produced by the Finnish Moskito Television, Black Widows is the television series created by Mikko Polla and directed by Venita Ozols-Graham in 2014 which is also popular as Desperate Widows is now remade and streaming on Zee5 is a crime story revolving around three women who want to have a life of their own with freedom and decide to play it safe.

Jayati Sardesai (Swastika Mukherjee), Shamita Shetty (Kavita Tharoor), and Veera Mehrotra (Mona Singh) are three friends who are married to abusive husbands at whose hands their lives go for a toss. All the three therefore hatch a plan to eliminate their husbands which they successfully accomplish without raising an eyelid.

But the aftermath incidents and the investigation by the inspector Pankaj Mishra (Parambrata Chattopadhyay) give these desperate widows sleepless nights. In turn, the connection between Innaya Thakur (Raima Sen) who owns a pharmaceutical company with dubious plans to sell vaccine by spreading a virus makes the lives of Black Widows more complicated with many skeletons tumbling out of cupboards which need to be cleared to save their skin.

How these three Black Widows cope up with all these complications and connections and how Pankaj cracks the mystery behind what could be a simple open and shut case is the remaining story of Black Widows.

It’s for the performances of the three female protagonists Swastika, Shamita, and Mona the Black Widows deserve a decent ranking as they have anchored the whole series with their exhilarating performances that are sure enough to catch the attention of viewers. While Swastika and Mona gave out graceful performances, it’s Shamita who gets a bigger slice of cake in an innocent yet idiotic character of Kavita which she portrayed with spotless precision. Above all, she looks more ravishing than the others (Raima Sen being an exception) and this makes her performance more sizzling.

Parambrata too got a breezy role in which he excels with Sharad Kelkar appearing in a significant role adds more grace to the series. Aamir Ali, Raima Sen, Nikhil Bhambri, Saheb Chattopadhyay (looks very promising), Shruti Vyas (superb acting potential), and Faisal Malik who appear in pivotal roles have done a great job with their excellent performances providing a decent leverage to the series.

Subhankar Bhar’s photography is pleasant and eye-pleasing while the background score by Aditya Pushkarna stands apart with the title track crooned by Nikhita Gandhi is well composed by JAM8 creating the right mood for the series.

Editing by Sumit Chowdary needs an upgrade as it lacks the slickness and this is another aspect which made the whole narrative lose its sway over the plot.

A sound theme with a riveting plot consisting of all ingredients required for a gripping entertainer but all the dots could not be connected properly.  Hence, the whole series looks bland and fails to create that oomph factor despite an engrossing story-line.

The director Birsa Dasgupta fails to create the required impact which is mainly due to poor screenplay which should have been more taut and engaging. While the adaption by Radhika Anand is on a positive note, the whole narrative lacks the depth and intensity as it slowly drowns into a routine predictable groove of a normal ordinary crime story of hide, seek, and fight after starting on a promising note.

Overall Black Widows disappoint and it’s another instance where a sound premise is spoiled by sloppy execution which can be watched only as a secondary option without having any expectations.