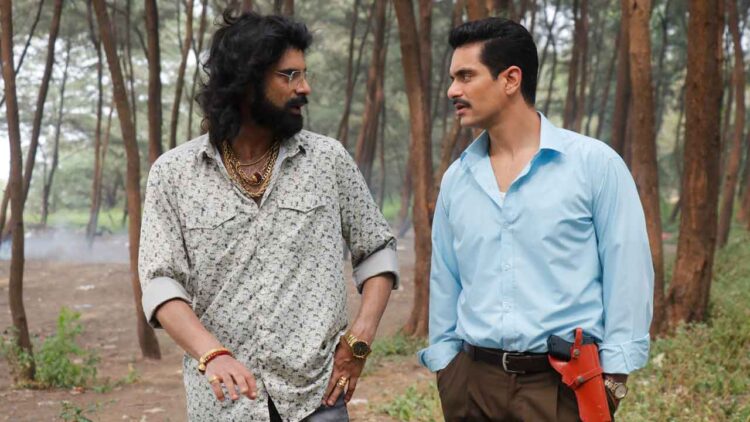 Top-notch performances are the hallmark of this obsolete story-line

The backdrop as evident from the title is Mumbai set in the 1990s that was ruled by gangs and dons. Mumbai has become a central theme of many films and web shows during those days and continues to do so even now after many decades. A boy who runs away from his home and reaches Mumbai either becomes a don or a police officer according to fiction which found its way onto celluloid several times.

The story of Bhaskar Shetty (Angad Bedi) in Mum Bhai which is streaming now on ALTBalaji and Zee5 is a similar one as he becomes an encounter specialist in ATS whose duty is to annihilate all gangs in Mumbai. His godfriend in Mumbai Rama Shetty (Sikander Kher) who is on the wrong side of the fence takes care of Bhaskar to fulfill his dream of becoming a police officer.

Kalekar (Sameer Dharmadhikari) who gets fascinated by the sharpness of Bhaskar makes him the topmost hitman in his team who goes on an eliminating spree of dons from Mumbai.

But things go awry as Kalekar could not digest Bashkir’s rising glory as a result he plots a scheme to put Bhaskar out of the game. Now Bhaskar needs to rediscover himself and find out the truth behind the ploy played by Kalekar.

Angad is seen in one of his best performances after Inside Edge who is ably supported by the charming Sandeepa Dhar whose performance is also a plus point to the series in the character of Vaishnavi.

Furthermore, Sikander Kher is a delight to watch and he proved once again his versatility with another different kind of role which he portrayed brilliantly.

Madhurima Roy as Ranjana too added the dash of glamour with a sizzling performance.

Sameer Dharmadhikari needs a special mention for his character of Kalekar which he has played with great diligence.

The background score by Harshwardhan Dixit provided the much-needed elevation to the narrative and it stands as the highlight throughout the 12-episode series.

An outdated story-line has made the execution by director Akshay Choubey looks quite ordinary as the emotional angle could not be elevated to the desired level. Especially the scenes of Bhaskar with Rama and Kalekar lack the required depth as a result they fail to create an impression which is the main drawback of this series.

Though there is plenty of action and albeit a successful effort to sustain the suspense element till the end, the whole narrative fizzles out slowly despite top-notch performances which are the hallmark of this obsolete story-line.

On the whole, Mum Bhai is enjoyable in bits but could have been made into an effective crime thriller with a much more gripping screenplay and inducing some freshness into the oft-beaten theme.