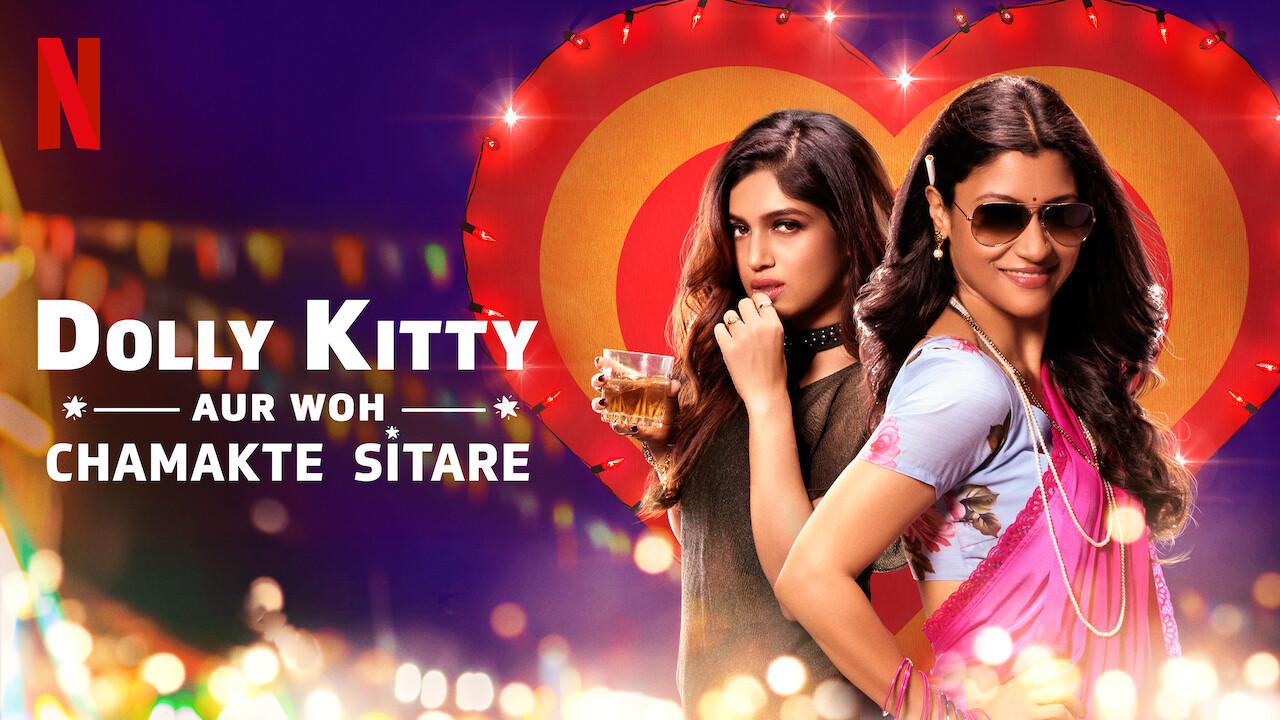 The women are still subjected to several hardships of exploitation; physically, mentally, emotionally, and sexually due to our patriarch system. Inadvertently, the choices, preferences, desires, and sexual assertiveness of women got relegated to back seat in our society which was riddled with sexual discrimination.

Sex education or sexual awareness which is a taboo in our society even now has made matters worse and Dolly Kitty Aur Woh Chamakte Sitare (DKAWCS) is an honest effort to explore all those fears, intricacies, preferences, and desires of women who not only struggle for freedom but also to empower them to raise their voice against exploitation.

Kitty aka Kajal (Bhumi Pednekar) stays with her cousin Dolly aka Radha (Konkona Sen Sharma) in the suburbs of Delhi who is married and living with her husband Amit (Aamir Bashir) and two children. Dolly who works in an office earns a meagre salary has a disillusioned life; as a result, she derives her ways to keep herself happy and satisfied.

Kitty quits the job in a shoe factory and also shifts from her cousin’s place due to advances made by Amit. She joins a company ‘Rose Romance App’ which offers sex chat by phone service for their male customers. As a part of her job, Kitty chances upon Pradeep (Vikrant Massey) and falls in love with him after a series of phone chats.

On the other hand, Dolly finds solace in Osmaan Ansari (Amol Parashar), a food delivery boy, and ends up having sex with him to get out of her ‘frigidity’ blues.

Kitty too goes to an extent of losing her virginity to Pradeep due to her love for him. Later she gets the rude shock of her life in the form of a bitter truth making her lose trust in love. This truth turns her cynical and she gets transformed into an altogether different Kitty.

In the end, Dolly and Kitty confess to each other only to realize that they have come too far to quench their desires and overcome their guilt to discover the freedom that has been eluding them. It’s now time for them to move on and make some wise decisions so that their lives do not suffer anymore.

When you got a national award-winning actor like Konkona Sen Sharma playing the lead role, then the impact on the whole film will be stupendous. She fits into the character of Dolly like a glove and it’s a treat to watch her enact the complex character of Dolly mainly through her eyes and facial expressions which convey more meaning than the usual dialouges.

Vikrant too has done well in a soft and short role along with Amol. Kubbra Sait shines in a lively girl character which plays an important role as a change agent in the life of Kitty.

Those who have seen Lipstick Under My Burkha by Alankrita Shrivastava who also directed DKAWCS along with providing story and screenplay may find some resemblances between the two. The theme remains the same but the treatment given to DKAWCS makes it more effective than Lipstick Under My Burkha or the web series Four More Shots Please which also dwells on the theme of freedom of women.

Alankrita is one director who does not mince her words or tone down her intentions. She made this very clear once again in DKAWCS. The message she conveys through her characters goes a long way in touching many hearts. For example, the portrayal of the character of Pappu who suffers from Transvestism syndrome highlights many issues that are quite thought-provoking. This is one classic example of her focus and brilliance in presenting the characters with a purpose.

Her sensible exploration of fears, fallacies, choices, and sexual assertiveness of women is highly appreciable as evident in DKAWCS. The way she handled the story of DKAWC without any scope for over boarding or outrageousness by sticking to her plot and uncompromisingly presenting the sensible and strong expression of sexual assertiveness quite amazing.

Her team comprising of John Jacob Payyapalli, the director of photography, Mangesh Dhakde, who composed the background score and, Charu Shree Roy, the editor, has done a tremendous job to translate her vision on to the screen quite remarkably.

More and more films of this genre are welcome. These kinds of films are the need of the hour to allay all fears, apprehensions, and provide a voice for women to express themselves freely with assertiveness.

DKAWCS is to be watched by all to have a glimpse of the inner self of women so that they can be treated on par without showing any discrimination or disrespect.

After all, Dolly and Kitty once again prove that “the secret way to a woman’s heart is not through her body but through her soul because physical love is short-lived but soulful love lasts an entire lifetime”.