by Pradeep Kamadana
in Entertainment, Films, Reviews
Reading Time: 4 mins read
8
A A
0 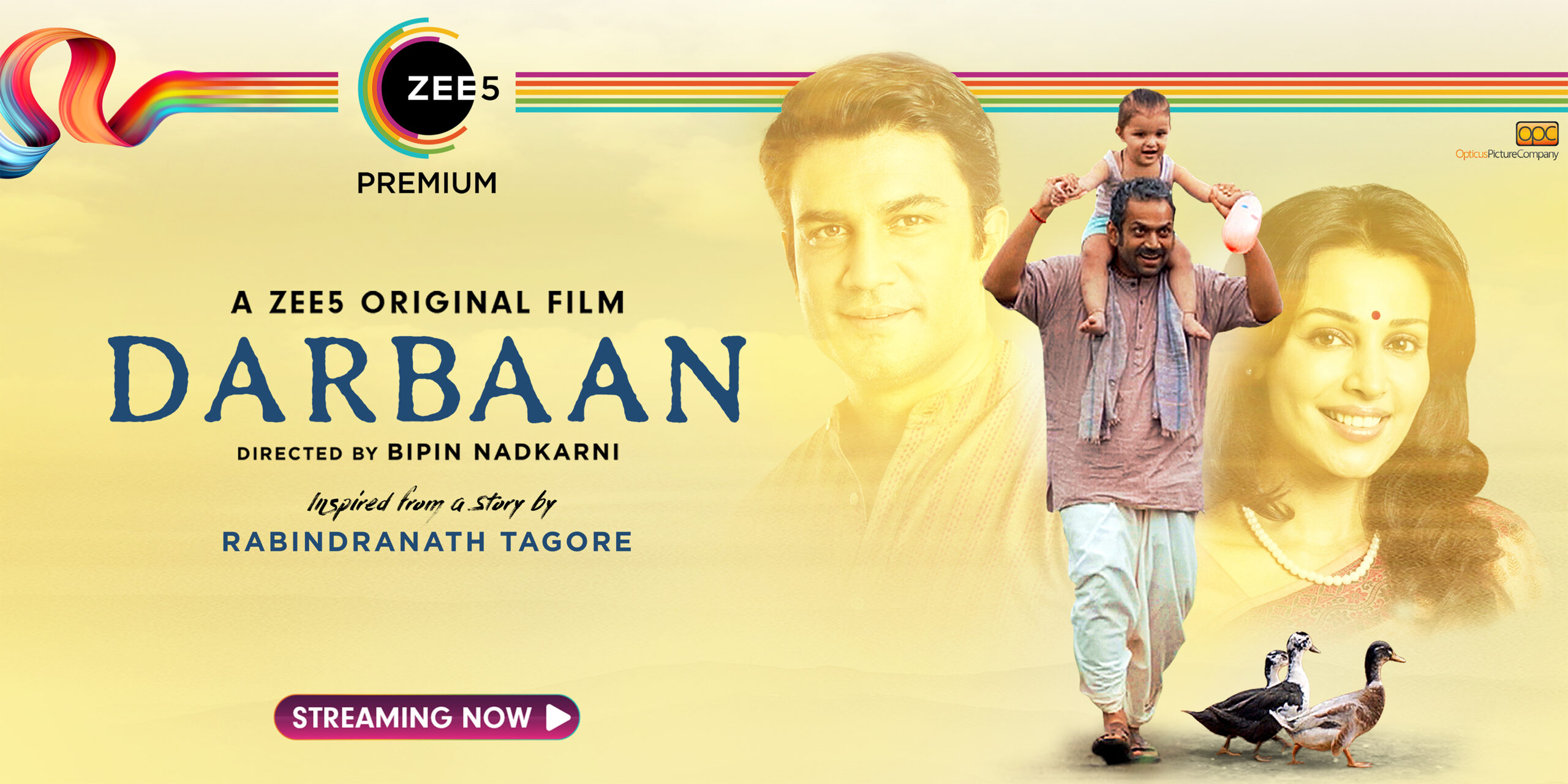 A soul-stirring tale of virtuous relationships

Nobel Laureate Rabindranath Tagore’s short story Khokababur Pratyabartan written in 1918 was made into a film in 2020 with the name of Darbaan which was scheduled for a theatrical release in April 2020 but failed to make it due to the Covid-19 pandemic and finally, it could see the light through the digital platform Zee5.

Though the basic story is more than a century old, it still reflects the poignant side of relationships and the never-fading bond between people irrespective of all socio-economic differences which is the lifeline behind the existence of human kind.

Raicharan (Sharib Hashmi) is a jack of all works in the bungalow of Naren Babu (Harsh Chhaya) who had a son Anukul (Sharad Kelkar) with whom the bond of Raicharan is more than a servant and care taker relationship.

Owing to the taking over of coal mines by Government, Naren Babu, and his family has to move away leaving Raicharan behind who now gets solace from his wife Bhuri (Rasika Dugal).

The grown up Anukul returns back with his wife, mother, and Siddhu his little son to the bungalow. He reaches out to Raicharan with an invitation to come back to the bungalow.

Raicharan could not resist the invitation and his return back to the bungalow much against the wishes of Bhuri recreates history and he reestablishes his bond with Siddhu from where he left with Anukul.

Unfortunately, fate decides otherwise and Raicharan has to face false charges which made him feel guilty and he has to opt for a supreme sacrifice to come out of that guilt which ends in making him a winner outside but a loser inside.

Sharib Hashmi makes everyone with a heart teary-eyed at the end of this film. This is perfect enough to demonstrate his performance in Darbaan which establishes him once again as an actor with great potential.

Sharad Kelkar and Flora Saini as his wife Charul are apt in their brief roles and Rasika Dugal too in a pivotal role makes her presence felt with superb performance.

Veer Sujeet Jangid as young Anukul and Yash Mistry as Siddhu have done a commendable job in their characters which are crucial for the progress of the story.

The award winning director Bipin Nadkarni who is also a co-producer has shown great maturity right from his adaptation of Tagore’s short story along with co-writer Rakesh Jadhav to the execution stage. He handled the narrative of Darbaan quite admirably and he succeeded in delivering the content quite strikingly by keeping all the emotions and the intensity intact all through the course of the film.

The background score by Rohhan Patel and the montage songs composed by Amartya Bobo Rahut are the other highlights of this film in addition to the story-line. All the four songs Kushmizaaj sung by Arjit Singh with Bobo, Rangh Bhariya sung by Gujraj Sing, Amrita Singh, and Bobo, Dil Bandar sung by Tushar Joshi and Bobo and Behti Si (Composed by Rajeev V Bhalla) sung by Rajeev and Rashi elevate the whole mood of the film to the highest level.

Another technically brilliant contribution has come from the Cinematographer Amalendu Chaudhary who captured the beautiful locations of cloud-topped Gangtok and pristine surroundings of Jharia in an extraordinary manner thus adding the much needed glow to the whole narrative making the total film look richer and beautiful.

Guilt is never to be doubted. This quote by the famous Czechoslovakian novelist Franz Kafka which is shown in the beginning sets the ball rolling for Darbaan and it conveys the entire theme of this film.

Relationships don’t see class, creed, age, and economic factors. It sees only the bond between hearts. A relationship that gets curtailed due to guilt or suspicion makes any life tougher to live as happened with the life of Raicharan. This fact was presented touchingly by Bipin on the screen which was originally contemplated by Rabindranath Tagore who has articulated the real essence of relationships in 1918 itself which holds good even now in these days of virtual relationships and digitization.

Darbaan is a soul-stirring tale of virtuous relationships and it is highly recommended for all age groups to experience the true relationship of a different kind that grows beyond any guilt and suspicion underlining the significance of care and compassion in any relationship.