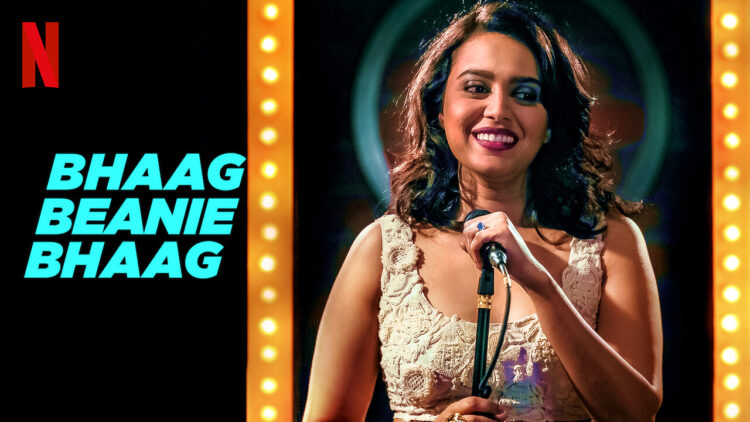 A young girl’s engrossing tryst with love, life, and career

The standup comedy has unearthed lot of hidden talent and with the onset of OTT, the demand for stand-up comedies also has grown multitudinous resulting in new performers hogging the spotlight on centre stage. This phenomenon has also inspired film and series makers to come up with stand-up comedy as the backdrop for their stories and the latest edition among these is the Bhaag Beanie Bhaag which apart from having stand-up comedy as the central theme it focuses on the choices a young woman has to make in her life and career.

Beanie Bhatnagar (Swara Bhasker) is a 29-year-old aspiring stand-up comedienne who had her eyes on a career rather than on a regular job and marriage. So she runs away from engagement and her love to try her luck on stage.

She comes across Ravi (Ravi Patel) the NRI comedienne who gets hooked with her and at the time when everything is going well, Beanie comes across a bitter fact about Ravi which compels her to get distanced from him.

The efforts of the parents of lovelorn Beanie who wanted her back through the intervention of astrology and psychology turn out to be futile as Beanie gets more obsessed with her career as a stand-up comedienne rather than getting bogged down with the relationships and compromises even desisting the advances of her ex-flame.

This is the show of Swara Bhasker who shines in the bubbly lovable character of Beanie. She is sure to win the hearts of the audience who see the girl next door in Beanie who had her dreams in place. She is the soul of Bhaag Beanie Bhaag and without her; it’s hard to think about Beanie.

Next, the character of Ravi also adds the extra thrust particularly the scenes after playing cricket in the beach, his character sails through quite credibly in an author-backed role.

Vasant played by Varun Thakur, Dolly Singh as Kapi, Girish Kulkarni and Mona Ambegaonkar as parents are exemplary in their respective characters.

The smooth flow is the biggest asset of this 6 episode series which is devoid of any lag or drag. While the creators Neel Shah and Ravi Patel along with writers Nishi Kalra and Devashree Shivadekar are mainly responsible for this swiftness, it’s the director Debbie Rao who gave an adorable shape to the creation is the driving force behind this series.

Mridul Sen’s catchy photography and crisp editing by Shabaz Alvi and Varun Kulkarni also have made Bhaag Beanie Bhaag a treat to watch.

The career, the conflict between choices and vulnerability that arises due to those choices which are quite common in the life cycle of a young girl whose tryst with life and love on one side and career on the other side is very well captured without any scope for melodrama or over boarding in this engrossing series.

Even the scenes involving the parents and their agony over the future of their daughter are handled with subtlety by adding much-needed humour wherever needed to lighten up the proceedings.

The only complaint is with the title and instead of Bhaag Beanie Bhaag it should have been Win Beanie Win which is more meaningful and sounds apt because of the plot as well as the heavy usage of English language in the series.