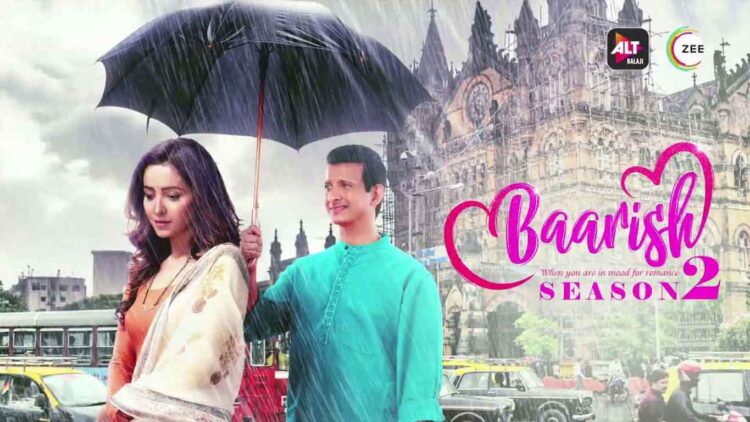 ALTBalaji’s Baarish Season 2 is poised to pack more romance and love in season 2, as evident from the teaser of this romantic drama which is released recently.
Its interesting to see  how Anuj (Sharman Joshi) and Gauravi (Asha Negi) who stand at the threshold of divorce are going to make it through amidst the love and romance that reigned between them.
Anuj and Gauravi, two desperate individuals from different social strata get bonded together by marriage in first season proving that nothing separates love once again . As love between them blossomed and amidst the marriage bliss, the millionaire Anuj of Mehta Diamonds gets deceived by his treacherous younger siblings who siphon off all his wealth leaving him high and dry. The season has ended with Gauravi bearing the brunt for the misdeeds of his brother in law and landing up in jail in place of Anuj.
In the latest season, she will be out of jail with nothing left and move into her middle-class parents’ home, and romance between the couple reaches the saturation point. The sequences shown in the teaser of season 2 are an indication of things to come with a dash of humour and packed with all elements to sustain the interest.
The surprise twist in the teaser is of course the appearance of veteran actor Jeetendra — well, not so much of a surprise as his cameo in the series  was expected during first season itself — but it is a welcome ploy adding more thunder to this Baarish. He is all set to play the role of mentor to Anuj, as the latter attempts to rebuild his business empire from scratch.
Moreover, the teaser is, just like the series with rain or baarish playing the central character in the series and continues to play along with flow of the story all through. The present teaser too with rain backdrop justifies the title to the hilt.
The trailer of Baarish Season 2 is to be released on April 29th along with update on the release date.
Watch the teaser here:
https://youtu.be/CnQ9RA1t7KM
Tags: ALTBalajiZee5
ShareTweetSend
ADVERTISEMENT
Previous Post

'Never Have I Ever' Review