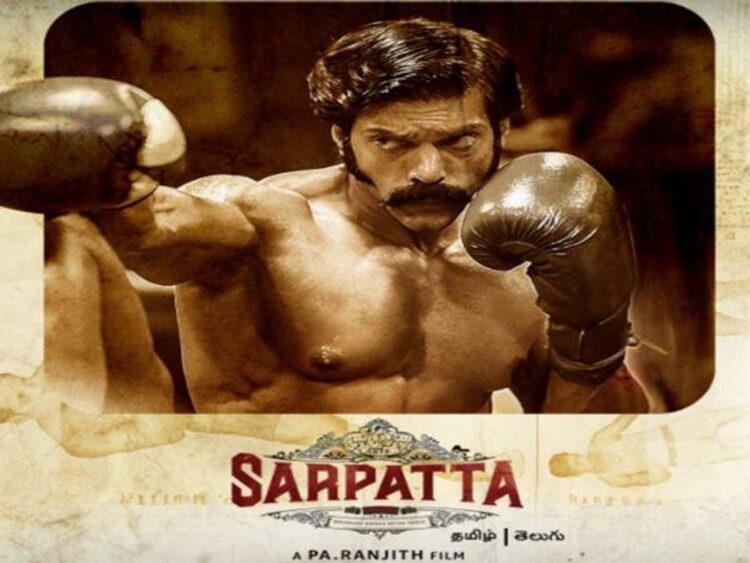 Many films were made with sports backdrops including some biopics like Mary Kom, Bhaag Milkha Bhaag, etc. which made their mark. Close on the heels of Toofaan which was released recently with a boxing background, another sports drama but with a different storyline, Sarpatta Parambarai based on the story that dates back to the boxing of 1970s makes its way in Amazon Prime Video which is also available in Telugu language.

Sarpatta Parambarai and Idiyappa Parambarai are two clans in olden North Madras who fight for supremacy in the boxing ring which was a raze in 1975.

Kabilan (Arya) who adores the coach Rangan (Pasupathy) is from a boxing family where his father gets killed in a brawl as a result his mother desists Arya’s involvement in boxing.

In the wake of the challenge by coach Rangan after facing defeat from Idiyappa clan, Arya has to enter the boxing ring to regain the past glory of Sarpatta clan and Rangan as well, has to fight against many odds on his path to victory. The political developments and imposition of emergency in 1975 bring about many changes which make Rangan a prisoner and throws Kabilan out of action.

How Kabilan fights it out and whether Rangan wins his challenge or not is the remaining story of Sarpatta Parambarai.

Arya gives out a mind-blowing performance. Not only action scenes, but also the scene where he repents and touches the feet of his mother later in the film, the emotions displayed by him are par excellence making him a complete actor.

On the other hand, Pasupathy too dominates by his expressions through which he conveys all the internal struggle being faced by him.

John Vijay is the other actor and his character though looks unimportant plays a crucial role as Daddy in motivating Kabilan and his English accent was able to tickle the laughter bone lot of times in the film.

Then comes other important characters. Shabeer as Dancing Rose impresses with that one fight whereas Santhosh Prathap as Raman, Kalaiyarasan as Vetriselvan, John Kokken as Vembuli are outstanding in their performances.

Special mentions should be made of Dushara Vijayan and Anupama Kumar who made their presence felt with a perfect display of emotions.

The direction of Pa Ranjith and his writing along with Tamizh Prabha are the important features of this sports drama. His punchy narrative elevates this typical sports drama. He was successful in presenting the enmity and the resultant clashes between the two clans in an appealing way.

From the first bout to the climax bout, all the action scenes were choreographed perfectly that added more fizz to the whole narrative. Stunt choreographer Anbariv has done a fabulous job in this aspect.

Santhosh Narayanan’s background score, as well as the songs were exemplary while the hard work by the art director T. Ramalingam is evident in every frame and he needs special appreciation for creating the mood and feel of 1975 along with the photography of Murali G for the eye-pleasing visuals.

Though some of the scenes involving the extended romantic angle and the later training part of Arya should have been cut shorter, one doesn’t feel the run time of nearly three hours was too long because of the gripping narrative and this is the charm of the film.

Sarapatta Parambarai, once again proved that a good script and a well-versed screenplay can do wonders to a not-so-endearing plot of revenge that revolves around a sport. Except for few lag moments which can be ignored, this film deserves a watch to applaud the terrific performance of Arya and for Pa Ranjith’s matured directorial abilities which went one step upwards after a couple of setbacks in the past.

‘City Of Dreams’ S2 from July 30 on Disney+Hotstar

'Chutzpah' Review: An impressive take on the sleazy side of cyberworld