by Ritika
in Entertainment, Reviews
Reading Time: 4 mins read
A A
0 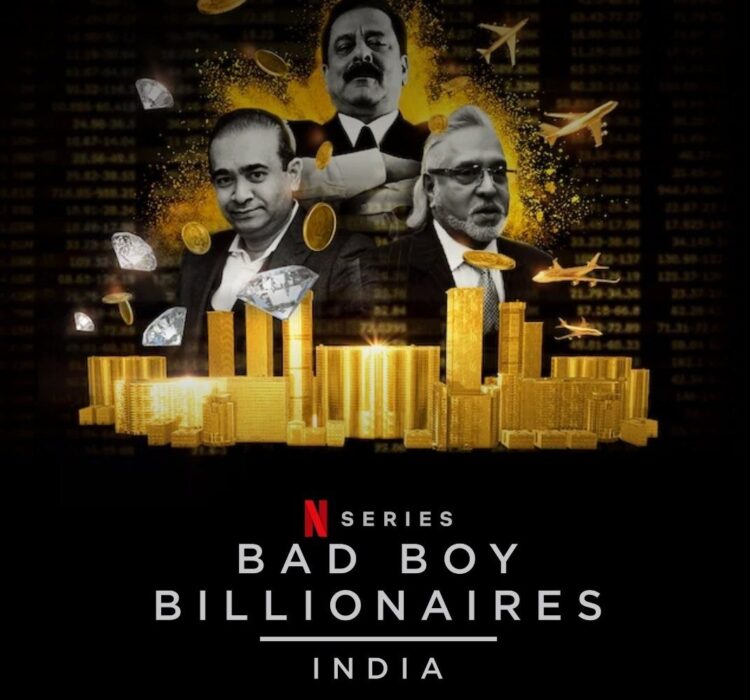 Bad Boy Billionaires: India, a Netflix original docuseries exposes the shady pasts of three businessmen of India who were quite successful until they were accused of corruption.

The docuseries which was scheduled to be released on 2nd September could not meet the deadline due to legal wrangles as a result the fourth ‘Bad Boy Billionaire’ Byrraju Ramalinga Raju gets a breather due to the legal battle that is going on in Hyderabad High Court.

Finally, Netfilx decided to give it a shot after omitting the episode on the erstwhile boss of Satyam Computer Services from the series and finally went ahead with only 3 episodes which were released on 5th October 2020.

The series comprises of three episodes featuring Vijay Mallya, Subrata Roy, and Nirav Modi. The docuseries shows the investigations of various agencies into their frauds, corrupt deals, scandals, and money laundering. Like any other docudrama, they uncover the truth behind all those murky deals. After watching this particular series, the first question which comes to everyone’s mind will be, is it so easier to mislead a bank to get Rs 9000 crore? And was it that easy to dupe the public for money?

Bad Boy Billionaires do not present any new story or information. Everything that is shown about these billionaires on screen is pretty much known to everyone all over the world.

The one very impressive thing is the way the information was gathered with precision and portrayed into three different episodes. The first episode on the debonair businessman Vijay Mallya is The King of Good Times, the second episode on diamond man Nirav Modi is Diamonds’ Aren’t Forever and the third one is on the rags to riches anti-hero Subrata Roy titled The World’s Biggest Family.

The narration in the whole web series is quite impressive; it made the series exciting to watch. Since it had a lot of new footages and news clippings, the narration was spot on to present the facts lucidly and it was successful in keeping the audience attentive all through the series. Every episode was well presented and the directors had ensured that everything is in detail without missing anything worth projecting . It’s crystal clear and to the point.

The king of good times

The craving of Vijaya Mallya for fame and glamour, how he used to enjoy his gigs were presented in an authenticated manner. Also, in the first episode, we get to hear many more from Vijay Mallya’s son and a family friend throwing more light on his lavish lifestyle. The footage from a journalist who followed this story along with inputs by industry experts also features in the first episode.

The second episode on Nirav Modi, a jeweller who fell from a very high point of his life when a bank employee retires and his successor couldn’t provide what he wanted. The fact that Nirav Modi was even featured on the cover of Sotheby’s stands as testimony to his shrewd business acumen.

The third episode focused on the life of Subrata Roy who built a lavish empire by collecting huge amounts of hard-earned money from people. The false promises of Roy attracted many daily wagers who deposited their money following the assurance that it gets doubled and tripled over a period. He diverted all the money collected from poor and middle-class people to fund his airlines, Amby project and, on sponsorship of the Indian Cricket team. Though he was arrested and in jail for two years, now he is out on bail.

On the whole a well intended psychoanalysis. Bad Boy Billionaires divulges the cravings of a person for money, power, and success by manipulating and turning the loopholes in the system to their advantage. The most disturbing feature is how these bad boys are still enjoying their lives despite all the wrongdoings.

Mallya celebrates his 60th birthday amidst fanfare while his employees were protesting; Modi was spotted in London leading a cool life while Roy too doesn’t lag and enjoys the private yoga class even in jail. This is how these Bad Boy Billionaires have taken the whole country for a cool ride!