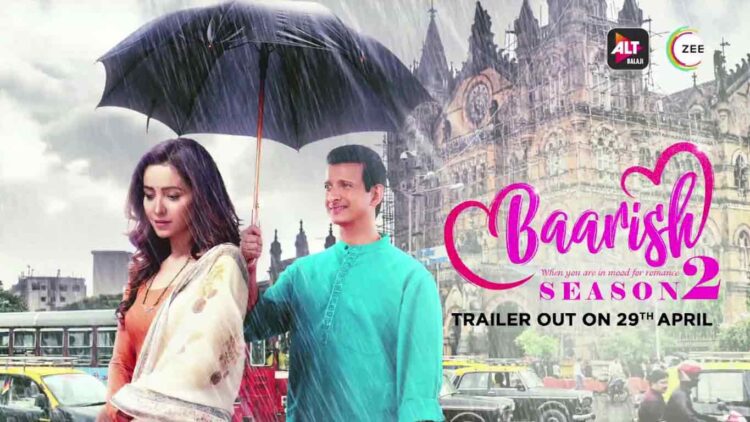 0
SHARES
27
VIEWS
Share on FacebookShare on TwitterWhatsapp
‘BAARISH SEASON 2’ TO STREAM ON MAY 6
Time has come for the wait to end and replaced by excitement in its place as Baarish Season 2 is going to stream on 6th May. The trailer released on May 29 has raised the level of expectations with the most wonderful couple Anuj and Gouravi coming together to fight it out against the injustice done to them in previous season.
Season 1 of Baarish has rather ended on a sad note with Gauravi still locked up in jail with Anuj desperately trying to bail her out from the jail. It remains to be how Gauravi is coming out of the jail and how this couple regather all that is lost due to betrayal of siblings.
But things doesn’t look as good as we all expected with many more twists and turns surfacing resulting in Anuj (Sharman Joshi) and Gauravi (Asha Negi) to sweat it out to build their business from a scratch. This obviously lead to friction among the two pushing them onto the verge of divorce as evident from the trailer.
This ALTBalaji and Zee5 presentation has a surprise to offer in the form of the legendary Jeetendra making a special appearance to save the sinking boat of Anuj-Gauravi. It remains to be seen how he turns as a savior for the both and turn Baarish a truly magnificent experience to watch.
Rain will again plays an important role like in Season 1 and it remains to be seen how the music and photography which elevated the first season to the next level going to fare to add that extra sheen to the fresh season of Baarish.
Baarish 2 has all the ingredients required for a taut family drama with focus on family values and significance of relationships so lets wait till May 6th to catch all the drama. Mind you, the arresting performances of the most talented lead pair Sharman and Asha are going to floor you again with their brilliant performances one more time.

The most intriguing question, What will happen to Rishi, the brother and Shreya, the sister of Anuj who betrayed Gauravi and Anuj? It remains to be seen. Suspense, suspense!!!

'Who's Your Daddy?' Review

Zombies are back : 'Betaal' Trailer