Akshay Kumar dedicates a romantic song but NOT to wife Twinkle Khanna, find out that special one here! 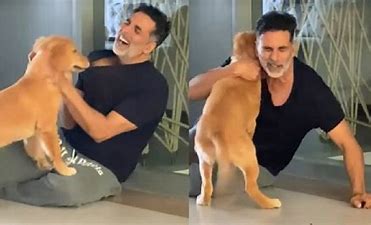 Sooryavanshi actor Akshay Kumar never leaves a chance to surprise his fans with his real-life things. Speaking of this, on Tuesday, Akshay Kumar shared a video of cuddling and playing with his pet dog at home. What seems adorable about this video is that the superstar dedicated his film Sooryavanshi’s song to his pawsome friend.

Taking to his Instagram reels, Akshay Kumar shared a video in which we can see him sitting on the floor in his house and seen cuddling and playing with his pet dog. This adorable video caught everyone’s attention. He posted the video with Mere Yaaraa playing in the background and also dedicated the lyrics of the song to his pet dog.
Sharing the video, Akshay wrote, “Lakhon mile, koi bhi na tumsa mila….A million love songs can’t match this unconditional affection. Pets are pure.”

Akshay and Katrina’s Sooryavanshi movie was released in theatres on November 5. The film is now streaming on Netflix. Every track from the movie was a huge hit, so was the romantic track, Mere Yaaraa. This song is sung by Arijit Singh and Neeti Mohan.

Talking about his upcoming projects, He will be seen in Pruthviraj but due to Covid19, the film has been postponed. Also, he will be seen in several other films including Ram Setu, Raksha Bandhan, and more.

For more such exciting updates and fresh news stay tuned to Cine Talkers.

All The Trick Arrows In Marvel’s Hawkeye, VFX Artists React To Paddington & More