[WATCH] Will Forte And Kristen Wiig Did Country Duo On ‘SNL’

by Snooper
in Entertainment
Reading Time: 1 min read
A A
0 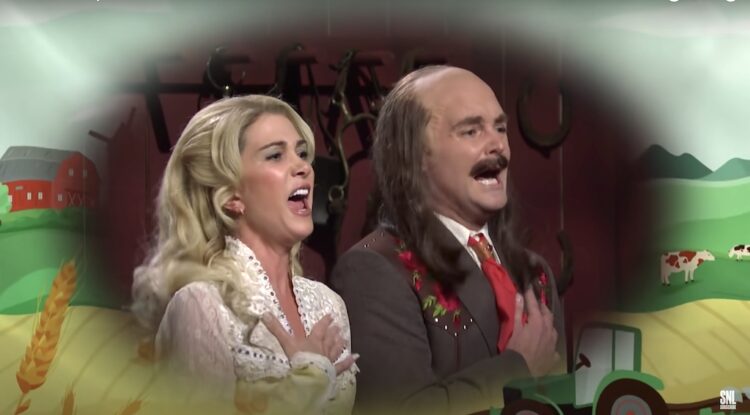 It was the aughts all over again on last night’s SNL. Not only was Will Forte, who left the show in 2010 after eight seasons, hosting for the very first time, but he had some guests. Kristen Wiig and Ryan Phillippe, both of whom joined Forte in the movie version of MacGruber as well as its new show, came by to bring the popular sketch back to where it was born. But that wasn’t all Wiig did: She joined Forte to bring back another, even weirder sketch.

For the first time since a 2009 episode hosted by Seth Rogen, Forte and Wiig dusted off Clancy T. Bachleratt and Jackie Snad, the only country music duo who dare sing songs spaceships, toddlers, Model T cars, and jars of beer. As show host Jeyner Keeblerely (Kenan Thompson) put it, those are “the four things they know best,” before letting them rip to treat viewers to the “ear caviar” that is such unsettlingly strange songs as “Salad Bar Boogie” and “Pool Trip Tango.”

It’s the kind of surreal end-of-episode sketch that used to be Forte’s, uh, forte. But since he was the host, it was smack dab in the middle of the episode, which leaned into Forte and Wiig’s brand of eccentric, goofy humor.

You can watch the two tear through strange songs in the video above.

Cardi B Impresses Fans Following This Grand Gesture She Made