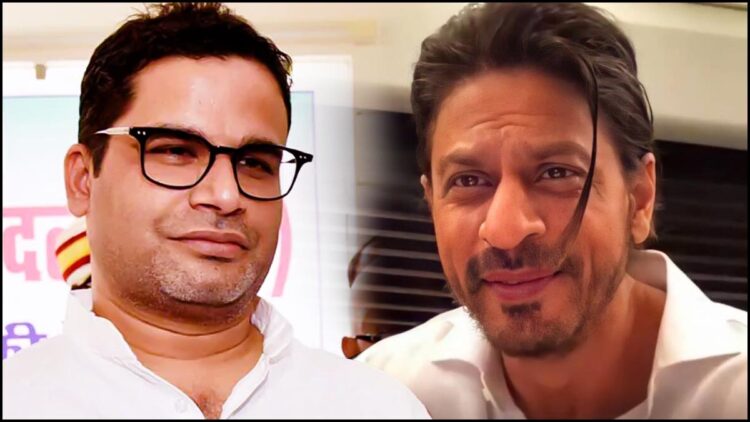 The popular political analyst who has scripted many victories for several political parties and leaders is now all set to enter the entertainment world. Red Chillies Entertainment owned by Shah Rukh Khan is keen to make a web series on this strategist who has become a force to reckon with in the Indian politics.

While there is no official confirmation from Prashant Kishor, his much anticipated meeting with Shahrukh Khan on Friday has assumed significance and in every likelihood the web series will take a definite shape in coming days if everything goes well.

Red Chillies Entertainment who made the web series Bard of Blood and Betaal in 2019 and 2020 respectively is yet to make any announcement on their upcoming projects. It also collaborated with the leading OTT platform Netflix to produce Class of 83 in 2019 and now there are two films, Bob Biswas starring Abhishek Bachchan, a spin-off to the thriller Kahaani (2012) and Love Hostel.

Prashant Kishor who is on a sabbatical after playing a decisive role in the recent elections of Tamil Nadu and West Bengal seems to be interested in a tie up with Red Chillies Entertainment. Prior to the meeting with Shah Rukh Khan, Prashant met Sharad Pawar, the President of Nationalist Congress Party (NCP) who also hosted lunch for him at his residence. The details of the meeting which went on till 2 p.m. are not known and both the parties are tight lipped about the agenda or the outcome of the meeting.

If the deal between Prashant Kishor and Shah Rukh Khan gets through, a different political drama will be on the cards unleashing many dark secrets and presenting lot of interesting factors that played crucial role in devising various political strategies making it an absorbing political drama altogether.

‘Shaadisthan’ Review : A praiseworthy effort to break the shackles of patriarchism