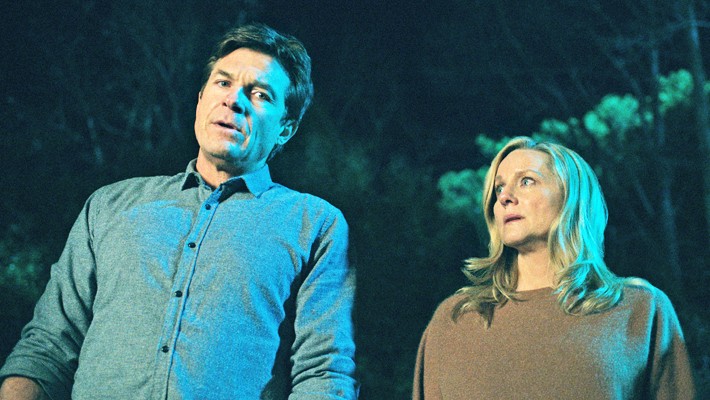 Ozark: Season 4, Part 1 (Netflix series) — The bad news is that Marty Byrde and fam will only be with us for one more season. The good news is that this is a supersized season that will arrive in two halves, so let’s pretend that it’s two more seasons. Jason Bateman’s baby has been good to us all, even if it’s been bad for Marty, Wendy, and the kids, and so-so for Ruth (Julia Garner’s set to rule the world). This season, we’ll see what happened after the blood-spattered tarmac happenings. One can bet that this new beginning won’t be any more relaxing than the Byrdes’ money-laundering U.S. life.

Servant: Season 3 (Apple TV+ series) — M. Night Shyamalan wraps up his current showrunning and directing duties with his cult-focused series that should wrap up what’s going on with that spooky nanny. Baby Jericho’s returned, and the tension’s all the way up to eleven, but the horror still has another round to go before either releasing or destroying this entire cast of characters.

Billions (Sunday, Showtime 9:00pm) — God only knows how the Powers That Be plan to shake things up and carry on after Damian Lewis’ Bobby Axelrod has left the building. This week, Chuck is upstate and clearing out his noggin while Prince is reworking the whole joint to his liking. Or not.

Euphoria (Sunday, HBO 9:00pm) — The sad pancakes are all gone, and Rue and Jules have touched base again. Rue’s now into a new business venture while she’s helping to arrange a new friendship while Lexi and Cassie are onto new ventures in their own right.

Somebody Somewhere (Sunday, HBO 10:35pm) — Sam’s bonding with members of the choir group while she and Joel find their friendship tested already.

Here are some more streaming picks:

Fraggle Rock: Back to the Rock (Apple TV+ series) — Get ready for this reboot of the 1980s Jim Hensen series that would never let the theme song leave your head. This is a half-hour series with more original songs, and expect these puppets to sound like Patti LaBelle, Ed Helms, Kenan Thompson, Cynthia Erivo, Daveed Diggs, and… The Foo Fighters? Yes.

Single Drunk Female (Freeform) — A 20-something alcoholic (portrayed by Sofia Black-D’Elia) must sober up and move back in with her mother, leaving her New York media career behind. This series is created by Simone Finch, and Jenni Konner executive produces this irreverent series about how a young woman must rebuild her life while being surrounded by constant alcohol triggers, including a formerly close friend who’s moved in on her ex. Not great, but you can’t let the world get you down forever.

Assembled: The Making of Hawkeye (Disney+ special) — Clint Barton and Kate Bishop and Yelena Belova in one show: the final product was better than most MCU fans dreamed possible. Here’s a look behind the scenes to see how the magic (and those stunts) happened.

La Fortuna: Season 1 (AMC+ series) — Stanley Tucci’s a rogue treasure hunter attempting to track down a sunken ship from the 1800s, and he get embroiled within a government conspiracy in the process. What more do you need to know?

The Royal Treatment (Netflix film) — A hairdresser in the Big Apple ends up making heads pretty for a charming prince’s wedding, and then, like, they end up having a thing? This sounds sketchy as heck, and of course, he’ll find himself torn between duty and love in the process. Bridgerton this ain’t.

The Puppet Master: Hunting the Ultimate Conman (Netflix series) — True crime fans can get a fix with this stunning story about Robert Freegard, who fleeced and conned several women and one man. These victims ended up believing that they were in, uh, operations for the secret service, and that they must comply for the safety of their families. Yikes.

Too Hot to Handle: Season 3 (Netflix series) — If you want to watch a bunch of beautiful people who are also sexually frustrated, then this is the dating show for you. Netflix is officially describing them as “horned-up hellraisers,” and yes, that sounds perfectly accurate. They’re all banking on being able to abstain from both sexual contact and solo gratification while playing this game for prize money…. and maybe some love? And yes, this one was inspired by Seinfeld. Watch out for those Costanzas.

Heavenly Bites (Netflix series) — Settle in to watch this series about all the food that Mexicans love to eat but hate to digest. Bring on the ghost peppers, baby.

Munich – The Edge of War (Netflix film) — This film, which is based upon Robert Harris’ international bestseller, takes place as Adolf Hitler’s gearing up (in 1938) to invade Czechoslovakia. Negotiations are also set to begin between a British civil servant and a German diplomat, who seek a peaceful resolution on behalf of Neville Chamberlain’s administration. The history books can tell us what happened next on the larger scale while this story also revolves around two men, also friends, who put themselves in danger while attempting to navigate political subterfuge.

Key Glock’s ‘Proud’ Is Our Rap Song of the Week

Deepika opens up about Filming Intimate Scenes in Gehraiyaan

Deepika opens up about Filming Intimate Scenes in Gehraiyaan