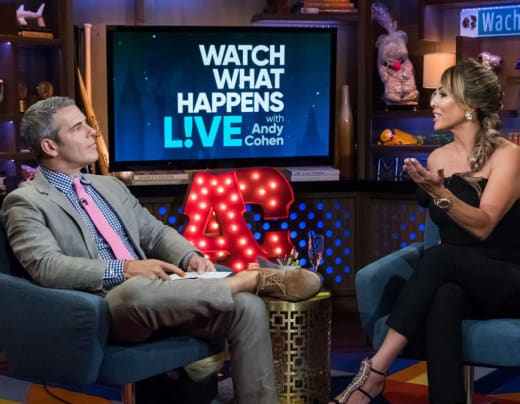 
Kelly Dodd has taken a break from dragging poor people and minorities in order to set her sights on a demographic she actually knows something about:


The Real Housewives of Orange County.


On Monday, the former Bravo personality jumped on Twitter in order to mock the revamped version of the franchise that made her famous.


Sharing a recent ratings report — which stated the December 22 episode of cable network series was watched by 822,000 viewers in real-time — Dodd wrote the following:


“Wait, wasn’t I the ratings problem? Wasn’t there a boycott??”


Dodd included a GIF of herself with the critique, adding:


We got over a million viewers 14 out of 16 weeks last season despite HUGE competition from election coverage on the news!!! This year? #RHOC16 under a million 3x in 4 weeks ! Hey @Andy How’s that reboot going???


Dodd was fired from the show in June.


The move came amid a flurry of controversial remarks made by Dodd, including a previous remark about how COVID-19 was God’s way of thinning the herd because it only kills dumb people and those who are less well off.


She eventually apologized, calling the comment “the stupidest thing I’ve ever said.”


Still, though, some viewers threatened not to watch The Real Housewives of Orange County as long as Dodd part of the crew after she made fun of the Black Lives Matter movement by wearing a hat that read “Drunk Wives Matter.”


Dodd had been a cast member since Season 11.


After getting tagged by Dodd in her Tweet this week, meanwhile, Andy Cohen clapped back at the former star.


“Look at the delayed numbers, not live. That’s what’s measured.”


Shortly after she was let go this summer, Kelly went on SiriusXM’s Jeff Lewis Live and said:


“You want somebody to love to hate you, or you want people to really love you, but I have a million followers and they are diehard, like, fans, and they love me. And then I have, then I have this little group of people that are the cancel culture that hate me.


“And so they’re the loud ones. They’re the, actually the ones that can’t afford to. The woke, broke people. They love to hate me.”


The Real Housewives of Orange County does look very different this season.


Dodd is gone, as is Braunwyn Windham-Burke and Elizabeth Lyn Vargas.


Bravo brought back Heather Dubrow, however, and this year’s series regulars also include Shannon Beador, Gina Kirschenheiter and Emily Simpson, along with newcomers Noella Bergener and Dr. Jen Armstrong.


Dodd and Cohen, for their part, have clashed in the past.


On stage at The Real Housewives of Orange County Season 15 reunion, the host called Dodd out for her ridiculous COVID-19 comments.


“I mean, the amount of messages that I get that you’re uneducated, you’re putting out misinformation, you’re behaving like a moron,” Cohen said at the time, to which Dodd replied:


“I get them too, saying that you’re anti-American. That you put your political beliefs out there, that they don’t want to watch a political show.”


A stunned Cohen responded, “I’m anti-American because I don’t like Donald Trump?” and Dodd confirmed, “Yeah.”


Speaking later to E! News, Dodd clarified that she didn’t vote for Trump, didn’t mean to make this feud political and added:


“My point with Andy was that you can always find negative comments on social media.


“Some people with zero posts and zero followers comment, but the vast majority of comments about me are positive.