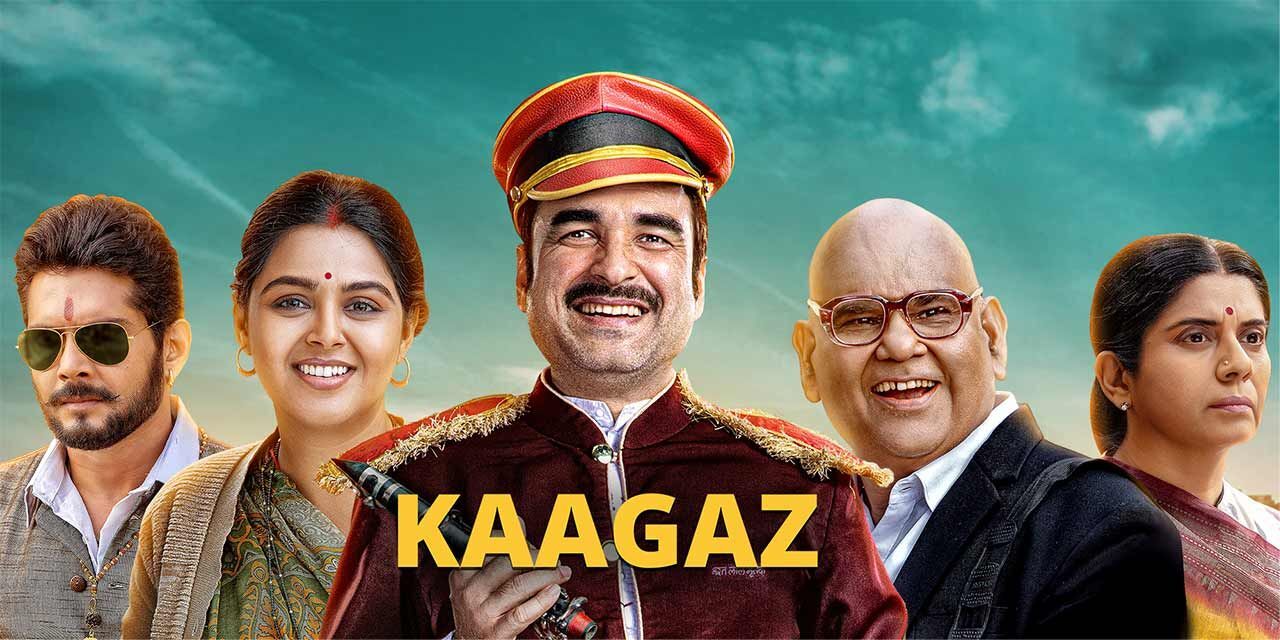 An intelligent film showcasing a common man's fight against system

An intelligent film showcasing a common man’s fight against system

Common man is found everywhere. In a city, town, village, in any street, bazaar, mohallah or any by lane. He had his own style of living and his trials and tribulations are not known to the world which chose to ignore him with all audacity. Kaagaz is the story of one such common man who was not only ignored but declares him dead by the system. Kaagaz streaming now on Zee5 is presented by Salman Khan Films and this is based on true events from the life of  Lal Bihari Mritak.

Bharat Lal (Pankaj Tripathi) is a bandmaster who is having his own band located in a remote village of Azamgarh in Uttar Pradesh. His bandwala shop gets too congested prompting him to go for an expansion of his shop. Hence, he approaches for a loan for which he has to pledge his property as a result he rushes to his village to claim his little piece of land from his family but unfortunately he could not get the land papers, the reason, to his utter dismay and shock he is a dead man as per records available in the registrar office.

A living man if he finds himself dead in the records of Government and if he fails to get recognized by the system as a living man, how that man reacts or how he combats with this strange crisis arising out of this peculiar situation and what he does to regain his identity as well as his life among Government records is the story of Kaagaz.

We know him as Kaleen Bhayya, the dreadful kingmaker of Mirzapur, and as Madhav Mishra, the wily lawyer who is full of tact and knack or as a maverick Guruji. But we didn’t know him as a common man and here comes Bharat Lal to fill that void and the result is one cannot find Pankaj Tripathi in this role but only Bharat Lal will be seen all through this highly appealing film. This is the potential of Pankaj Tripathi and he used it to the maximum in portraying the character of Bharat Lal which he does with great authenticity and authority.

Monal Gajjar as Rukmani proved that there is an actor in her apart from glamour and this revelation will get her more opportunities in future to show case her acting potential with Kaagaz creating the right platform to exhibit her talent.

Satish Koushik, Mita Vashisht and all others are perfect in their characters and performed well to drive the film forward.

Though Kaagaz is a story derived from true incidents, Satish Koushik, the writer and director has treated it in a different way so that while keeping the essence of the central theme intact he has intelligently added the entertainment angle to the otherwise a dull and dry storyline. Satish is successful in piloting this film in an effective way without losing grip on the narrative and making every second of the film quite interesting with an impressive storytelling.

Imtiaaz Hussain’s screenplay and his dialogues with Ankur Suman and Shashank Khandelwal are other noteworthy features of Kaagaz which cannot be ignored.

To add, the background score by Srijan Vinay Vaishnav elevated the mood of the film while all those songs composed by Rahul Jain, Parvesh Mallick, and Ceazer created the required magic on ears making Kaagaz a fully engaging film by all means.

Before digitalization everything in system used to move by paper. Births, deaths, marriages, registrations, and what not, paper used to play the most important role in everybody’s life. It needs a herculean effort to change or trace anything that was recorded on paper as it involves a cumbersome process in view of bureaucracy that prevailed and complicated procedures that are required to retrieve and make the necessary changes. This point was very well explored in Kaagaz which is the high point of this film.

Kaagaz is a definite watch to figure out the functioning of our early system and its slow transition into a paperless system. But unfortunately, still there are victims who got engulfed by the old system and struggling to come out of the clutches of paper ruled system with the fruits of digitalization eluding them.

Overall, it’s an intelligent film showcasing a common man’s fight against system. Keep rooting for Bharat Lal and a big shout out to Pankaj Tripathi for his path breaking performance that made Kaagaz a compulsory watch. Don’t miss the ending quote rendered by Salman Khan for a wholesome experience of Kaagaz expressed brilliantly by Aseem.