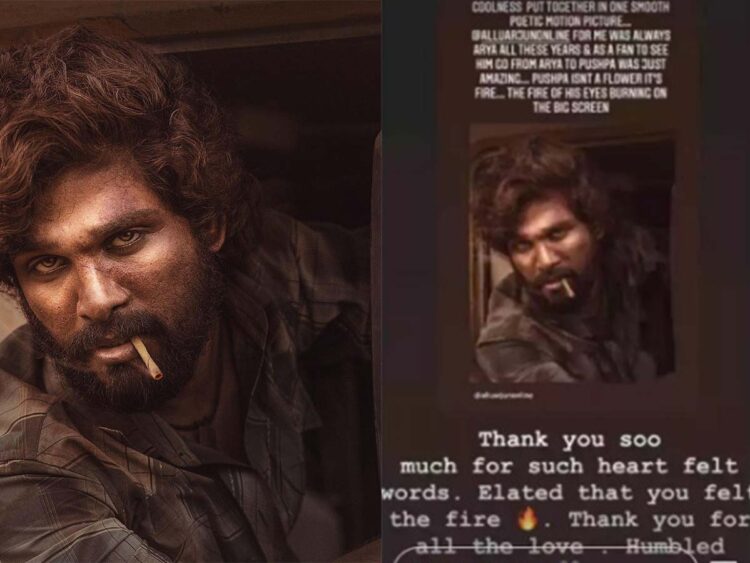 Icon star Allu Arjun and Rashmika Mandanna  starrer  Pushpa: the Rise, helmed by Sukumar, is creating waves among the audiences. The movie was arrived at the theaters on 17th December and turned out a blockbuster at the box office. Number of the celes from the film industry are showering praises on the movie and now the  name of Bollywood actor Arjun Kapoor has also been added in this list.
After watching Pushpa starring Allu Arjun,  B town actor  Arjun Kapoor penned a long note and expressed his fanboy moment.

Arjun Kapoor shared a pic of the actor from Sukumar’ magnum opus and wrote  on his Instagram: Pushpa is not a film. It’s an experience, a juggernaut of attitude intensity and coolness put together in one smooth poetic motion picture…. for me was always Arya all these years  and as a fan to see him for from Arya to Pushpa was just amazing… ‘Pushpa’ isn’t a flower it’s fire… The fire of his eyes burning on the big screen.”

It is known that Arjun Kapoor and Anshula Kapoor tested  positive  for the novel coronavirus after their trip to Bikaner and are currently under quarantine.

On the otherside, currently Allu Arjun is enjoying the success of  Pushpa: the rise and he has started the preparation for its second part.

Janhvi Kapoor shares a cryptic post about being down with fever, see pic

‘Spider-Man: No Way Home’ Has Now Out-Grossed ‘Titanic’ Domestically And Is Coming For ‘Avengers: Infinity War’ Next