Adriana De Moura and Julia Lemigova: Just Flirty Besties or Are They Boning? 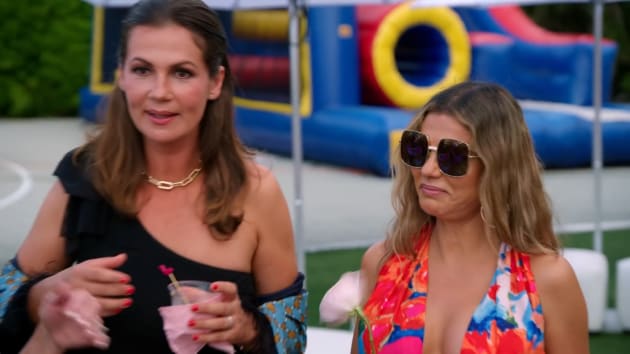 
After a lengthy hiatus, The Real Housewives of Miami are back for a fourth season.


Thought he series revival is streaming on Peacock, it is a hot topic among Bravo fans and includes many familiar faces.


One subject that keeps springing to mind is the … friendship … between Adriana and Julia.


Are they good friends? Are they friends with benefits? Or are they fake-flirting to give themselves a storyline?


Adriana De Moura is a returning Housewife, but this time around she is newly divorced.


Julia Lemigova is happily married — and, in a long-overdue milestone to the franchise, an out Housewife with a housewife of her own, Martina Navratilova.


But … what exactly is going on between Adriana and Julia?


There is a lot of friendliness of an overn nature between the two of them.


On camera, anyway. Viewers are not the only ones who are picking up on this.


Guerdy Abraira has noticed, and straight-up suggested that the two have a “friends with benefits” situation.


Juliana gave Adriana a foot massage — which, though often purely platonic, can be very flirtatious in some contexts.


Martina was weirded out about it.


According to the tennis pro, Julia has only given her one foot massage — and they’re married.


Before we start screaming “love triangle!” from the rooftops, we should consider the alternatives.


Adriana has been pulling out the fakery since her first season on the show — which was Season 1.


At the time, she was happy to pull the wool over the audience’s eyes about her marital status at the time in order to give herself a storyline.


About a decade later, how much has really changed with Adriana and what she’s willing to do for ratings.


In some circumstances, we might love to see a flirtation between Housewives spark and turn into a romance.


But, in this case, Julia is a happily married woman, and we would hate to see someone’s marriage sabotaged.


It would be especially grim if the franchise’s first (and, again, long-overdue) pair of wives had genuine marital trouble.


This would be made even worse if fake flirtations, played up for the cameras, had this deleterious effect upon a very real marriage.


But maybe it’s harmless flirting, or maybe it’s fake (and everyone’s in on it). It is interesting to watch it all play out.


Julia has commented about Adriana’s lips (honestly, which Housewife’s lips aren’t comment-worth in one sense or another?).


When Adriana and Guerdy went to visit Julia and Martina’s farm, that’s when Julia performed a foot massage.


Now, Adriana’s stiletto heels were soiled beyond recognition by the ickiness of farmland, so it didn’t come out of the blue. One could argue that Julia was being a good host.


Adriana had placed a flower in her cleavage, and Julia said that she would certainly have to resist smelling it.


Guerdy stirred the pot, bringing up the foot massage in front of Martina … who couldn’t help but notice that she has only once receive such special treatment.


There was a lot of harping on the foot massage, with other Housewives weighing in on their marital boundaries.


However, on Watch What Happens Live, Julia affirmed that she is happily married, that Martina is not insecure about her friendships, and that she and Adriana are just friends.


Between editing, the nature of the business, and perhaps some mischief on Julia and Adriana’s parts, we’re thinking that this is just a fun storyline blown out of proportion.

Priyanka & Nick ’Not Too Busy to Practice’ making Babies

A breathtaking quest in Tibet for 'The Velvet Queen'