Who ‘Killed’ Boba Fett in ‘Star Wars: Return Of The Jedi’? 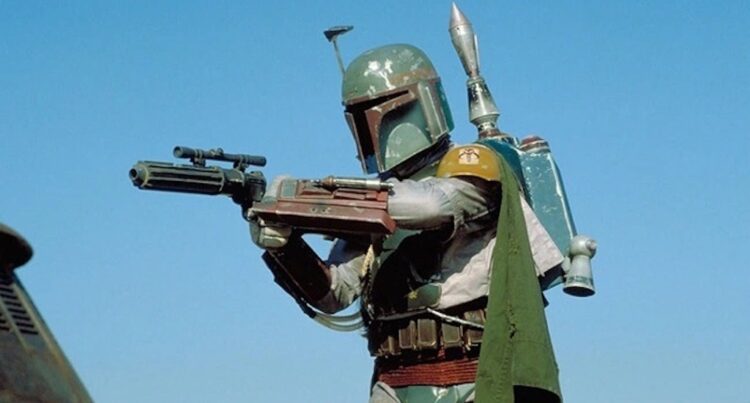 Since his first appearance in the cartoon section of the otherwise infamous Star Wars Holiday Special, Boba Fett has enraptured audiences. What’s drawn fans to the character, who rarely speaks and only plays small if pivotal roles in two of the original Star Wars films? His enigmatic air and cool costume sure help. The character is finally front and center in the new Disney+ show The Book of Boba Fett, having been effectively brought back to life in the second season of The Mandalorian. For ages, though, those who never read the many Star Wars books presumed he was dead, having eaten it in Return of the Jedi. So who “killed” him and how did he survive?

Let’s back up, though. Boba Fett made his live-action debut in The Empire Strikes Back (then played by the late Jeremy Bulloch), appearing one of many bounty hunters enlisted by Darth Vader to track down the Millennium Falcon. Fett is the lucky one, who winds up with Han Solo as his prize, delivering him in carbonite to Jabba the Hutt. Fett was back in Return of the Jedi, but he didn’t last too long. During the battle that ends with Jabba’s compound destroyed, Fett attempts to take out Luke Skywalker, but he’s thwarted by Han Solo (Harrison Ford), newly unfrozen and still unable to fully see again. In the chaos, a fumbling Han accidentally destroys Fett’s jetpack, sending him tumbling into the mouth of the Sarlacc, a beast who lives under the desert floor, inside the Great Pit of Carkoon.

So the answer to who “killed” Boba Fett? It was a combination of Han Solo and the Sarlacc.

But then, he didn’t’ actually die. In the first episode of The Book of Boba Fett (where he’s now played by Temuera Morrison, who also played Jango Fett, his father, in Attack of the Clones), we see what had previously been described in even greater detail in the Star Wars novels (and with Patton Oswalt once predicted on Parks and Recreation): That he managed to survive being eaten by the Sarlacc and, after some time, escaped, only to have his armor stolen by Jawas. But that’s another story, which continues to be told in episodes that have yet to be released.

New episodes of The Book of Boba Fett are released every Wednesday. In the meantime, enjoy Boba Fett biting it — or so audiences of 1983 thought — in the original, non-Special Edition version of Return of the Jedi.

Malaika Arora Reacts to being Trolled for her Outfit Choices

SRK gestures his Egyptian fan who helped the Indian professor

SRK gestures his Egyptian fan who helped the Indian professor