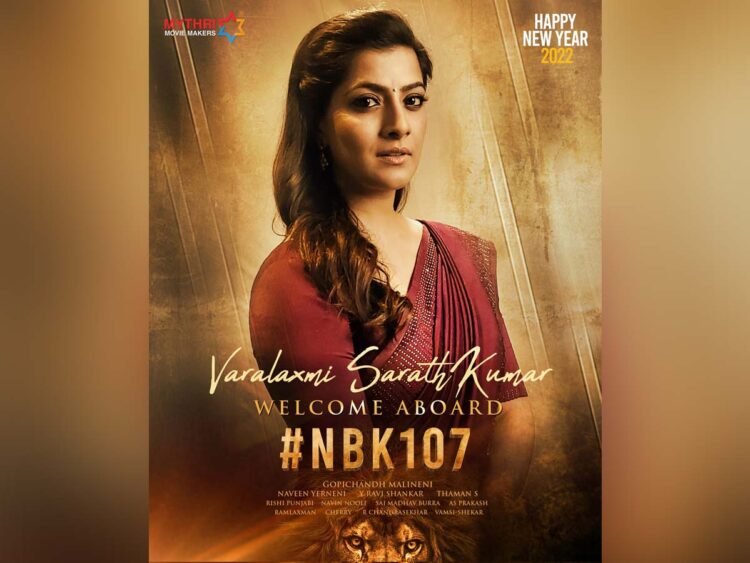 It is known that Nandamuri Balakrishna and director Gopichand Malineni  are all set to work together for a film #NBK107. Touted to be a mass drama, the film has an interesting lineup of the cast joining the team.  Today morning the makers of #NBK107 officially announced that  Varalaxmi Sarathkumar is onboard for Nandamuri Balakrishna starrer.  Shruti Hassan who was last seen in Power Star Pawan Kalyan starrer court room drama Vakeel Saab, will be seen sharing the screen space with Paisa Vassol fame star.  Few days ago, the team of NBK107 also welcomed Duniya Vijay on the board and today the makers revealed the inclusion of  Varalaxmi Sarathkumar in Balakrishna starrer.

After her powerful performance in Gopichand Malineni’s Krack, Varalaxmi  Sarathkumar comes on board to play a strong role in NBK107 as well. The upcoming yet to be titled film  is said to be based on true incidents. It is bankrolled by  Naveen Yerneni and Y Ravi Shankar on a massive scale.

National Award-Winning Craftsman Navin Nooli is  the editor and AS Prakash is the production designer whereas Chandu Ravipati is the executive producer.

On the otherside, Balakrishna is currently enjoying the success of his recently released movie Akhanda in which he romanced Pragya Jaiswal.

Team #NBK107 welcomes the most talented & versatile actress @varusarath5 on board

Is Rakul Preet Singh getting Married in 2022?