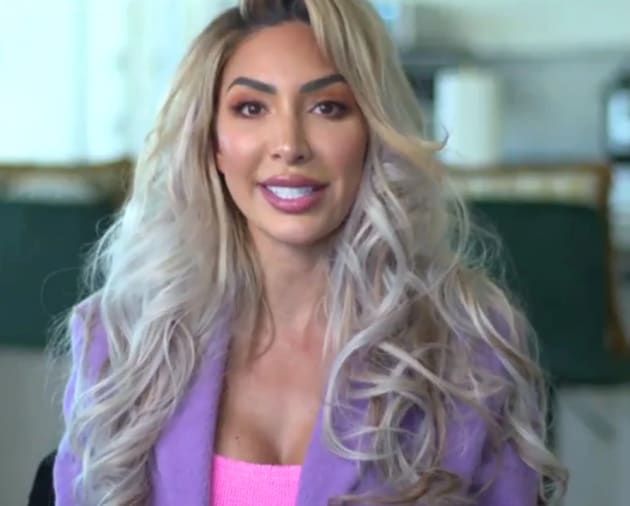 
Have you ever thought to yourself, “Wow, I’ve always really enjoyed following the shenanigans of this reality star, I just wish I could own a little tiny piece of her poop”?


Because Farrah Abraham is selling her poop on the internet.


It’s been a long, strange journey for Farrah, this past decade or so.


She became famous for getting pregnant at 16, and she built on that fame by having a remarkably dysfunctional home life and because of the uniquely horrible fact that her child’s father passed away.


Not a great start, to be fair.


While Farrah originally had dreams of opening her own restaurant, she also did some modelling on the side, and while she did take some courses at a culinary school, those dreams never came true.


She did, however, lean more into the modelling, and she started up some other hustles to make the most of her reality show fame.


She wrote a memoir, released an album along with a music video — she even came out with her own pasta sauce.


And things have never been the same since.


After the sex tape got her tons of money and attention, she started selling sex toys, too, and she started doing appearances at strip clubs across the country.


Eventually she started working as a cam girl, and there have been persistent rumors for a while now that she also works as an escort.


She hasn’t appeared on Teen Mom for several years now — MTV fired her for her refusal to stop working in adult entertainment, as well as for her general inability to behave like a decent human being — so all we can really do is watch what she chooses to share on social media to keep up with her life.


But fortunately for those of us weirdly fascinated with Farrah, she does share a lot … perhaps too much.


She’s been on OnlyFans for a while now, and in 2020 the world learned that she was selling videos of herself pooping for $100.


A lot of people thought that she’d hit an all time low with that, but now she’s taking things a step further.


Because she is now filming herself pooping and then selling the poop.


In a video she posted to her OnlyFans account, Farrah gave her followers the scoop, opening things up with “Hey loves, so real quick I wanted to show you how I sh-t in a jar and send it to you!”


This is really where we are now.


She was in the bathroom while filming the video and she showed off the tiny jar she uses to hold the product, then demonstrated how things work (with her clothes on), explaining “So I take my number oop! Then I wipe my oop!”


“Then I put it in here,” she continued, stuffing a (clean) cotton ball inside the jar, “then I cork it and I get Saran wrap and wrap it all up and put a special message on it, and your name.”


“And, I don’t know, just sending you special blessings of this year in a lucky jar.”


Just in case you were concerned, she added that “I’ve found that the cotton ball keeps the smell the best ever,” so no worries there.


She also made a reference to 90 Day Fiance star Stephanie Matto’s fart jar business, joking “I just said ‘oh well’ about the fart and just went with the real deal!”


As of now, we’re not sure of any additional details — the video was ripped from OnlyFans and shared to social media, and it seems like she deleted it from her profile there anyway.


So if you’re curious about how much a “lucky jar” like this would cost, we can’t help you there.


But now you know that this is a service she offers, and that there are potentially little jars of Farrah Abraham’s poop floating around out there, and isn’t that enough?

Did you know Jr NTR ran bare feet in thorn-riddled jungle for introductory scene in ‘RRR’? Details inside